What's on your mind?

Does anyone know or at least have any theories on why a lot of the Arthur games I used to play as a kid on the PBS Kids website was removed?

I mean, a lot of people think that the reason why Comic Creator was removed was because most of the people who used it would either make a comic and claim it was fanart despite the fact that they didn’t own the rights to those images or because they could make the Arthur characters do inappropriate things, but what about the others, like Dream On for example?

I remember I used to play “You’ve Got To Be Kidding” on PBS Kids.com when I was a kid. I loved Arthur back then. Today I saw an image of the gameplay on the BFDI Wiki and wanted to play it again just to find out that it was removed when I was 10.

At least it isn’t as sad as when Kart Kingdom was removed. Who else remembers that game?

You've Got To Be Kidding!

Which Characters do you think we're better in the old seasons?

I would change the ending to 'It's Only Rock N' Roll' (AKA one of my favourite episodes) to have U Stink (and perhaps We Stink) NOT break up and keep the band for the rest of the series because everything's better with a band! Which ending would YOU like to change? (make sure to explain how you'll change a ending)

Some fanarts that i did of arthur in recent months, I drew these while watching some episodes, feel free to recommend a arthur character for me to draw! (the order is from the most recent to the oldest drawing) 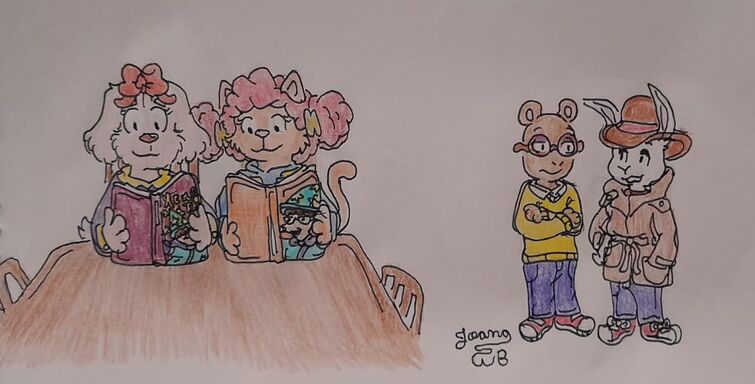 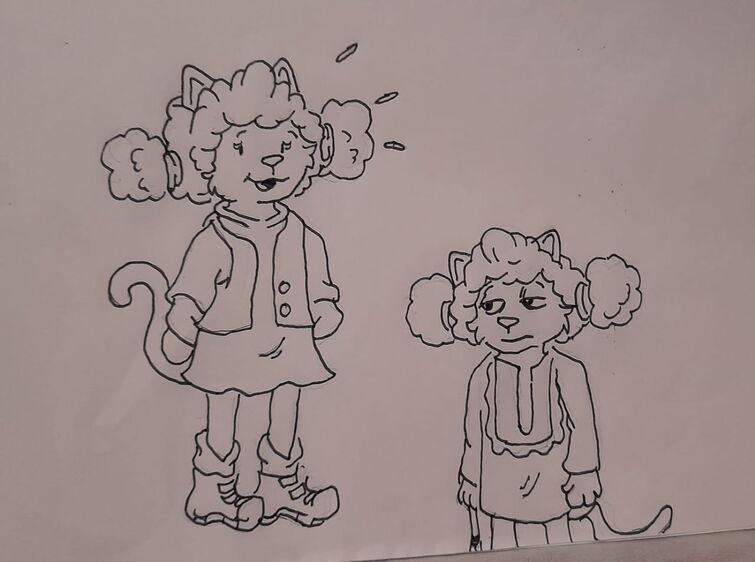 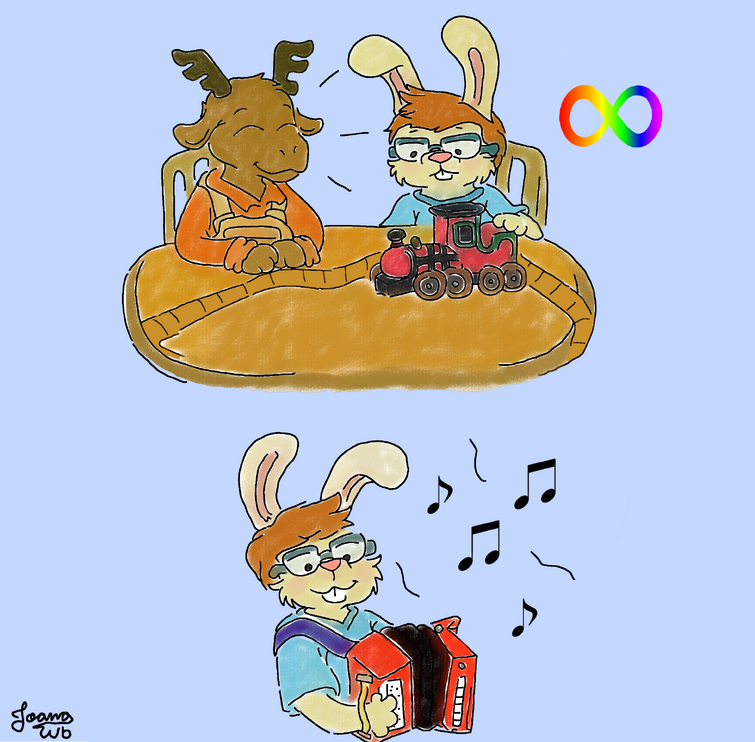 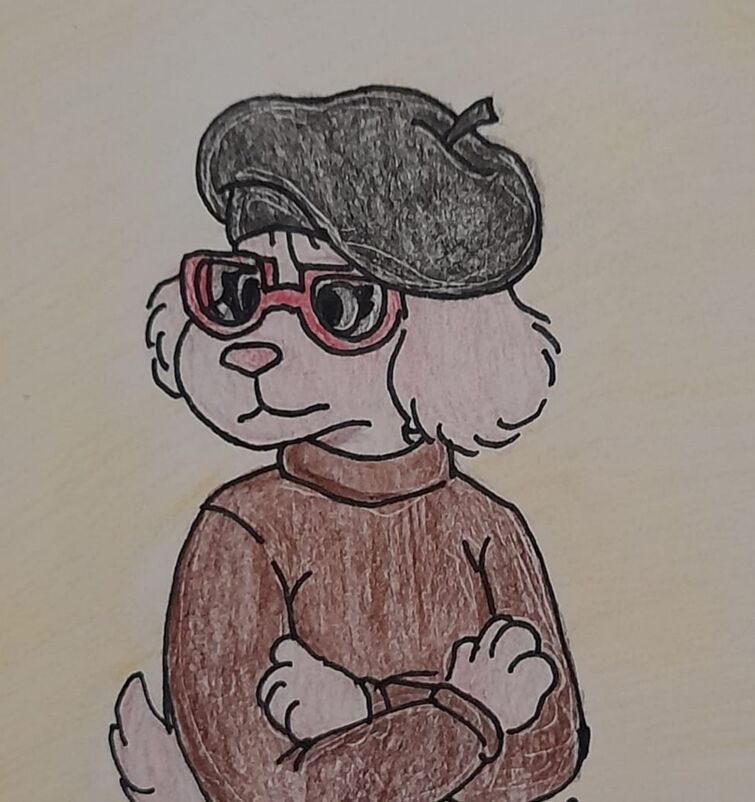 I mean the Postcards With Buster episode from 2008 where Buster visits Beijing, China and that wearing your mask PSA with Francine and Muffy.

What I think is that it could be when Arthur goes to fourth grade.

What do you think?

DAE feel like the writers were too harsh on Arthur in the episode Cast Away? I don't like this episode and a lot of people seem to hate it as well.

Even though it did have a satisfying ending when Arthur and David saw the whale, D.W. got to see it too, (and Arthur freaking tapped D.W. on the shoulder so she could see it.) What are your thoughts and feelings about this episode?

Does anyone remember Buster running out of Mega Kid in Muffy's New Best Friend?

In the episode, he is at Mill Creek Mall with her and Bailey. They enter Mega Kid with her saying "Congratulations, Buster." 'You're the first person to pass the oral exam." "Now, it's onto the shopping test."

He asks her a question saying "That includes lunch, right?" and she answers him by saying "Of course." "That's where we compare our purchases." 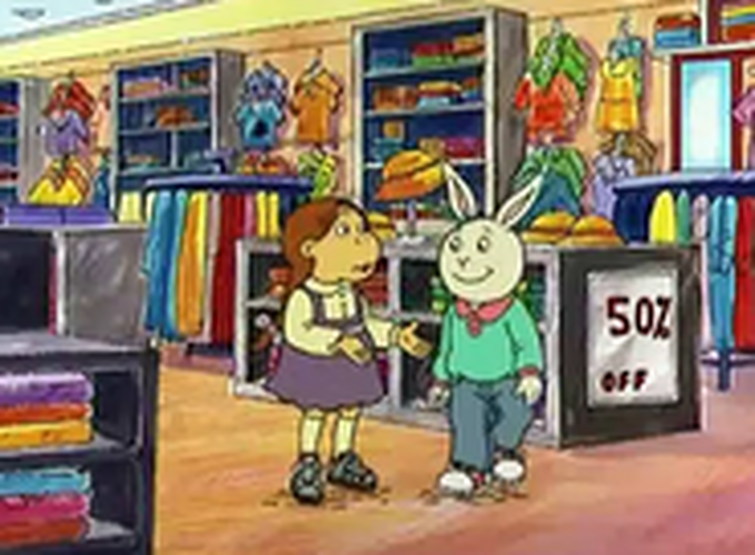 She sees a shirt that she likes and she says to him "Oh, look."

She runs and picks up the shirt saying "How adorable."

She then asks Buster what she thinks of it but he doesn't answer her. Instead, he looks around at all of the clothes in the store.

He becomes nervous and says "Clothes. Everywhere." He tugs on the collar of his shirt with his hands saying that he "can't breathe". 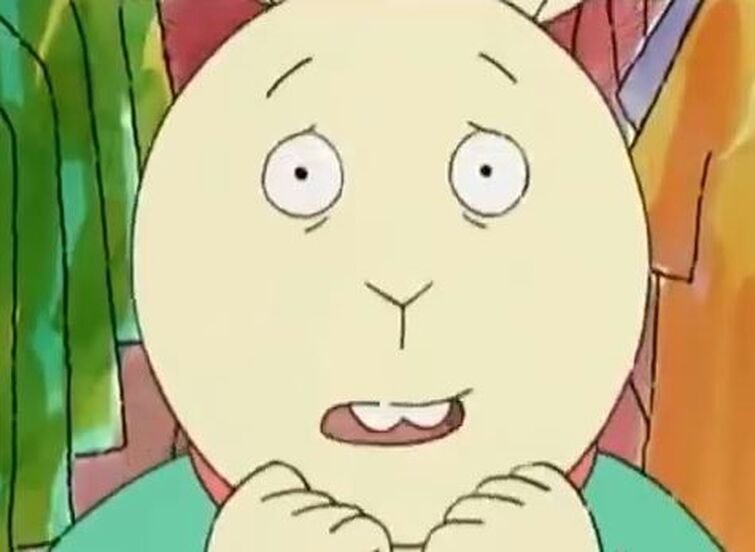 He then screams and runs out of the store with Muffy calling his name trying to get his attention. He enters David's Toys while running and panting.

He is last seen in the episode calming himself down and saying to himself "Ah, toys." "All better now."

Does anyone at all here remember him doing that in the episode?

Why did he do that in the episode?

Is it because clothes make him uncomfortable?

Does he prefer not to wear them?

Does he prefer to be nude?

Does it mean that he is going to be a nudist or a naturist when he grows up and matures to an adult age?

Please let me know as soon as possible so that all of my questions will be answered.

Who voiced ‘Arthur’s’ bossy sister, D.W.? A new podcast goes searching for the male actors who brought her to lifethestar.com

1: It's been quite a while. is the category that mentioned here still being worked on? Suggestion | Fandom

2: Is D.W. the only character whose name is an inspiration by another character?

3: a few weeks or whatever back, I made an edit on The Brain. User contributions for Shadowninjagamer 101 | Arthur Wiki | Fandom Are the edits apparently official now?

6: Speaking of that episode, why is the plot for the episode on the wiki short and not long?

7: In the title card for Emily Swallows a Horse, why is it Buster Roars Like a Lion when he literally doesn't appear in the episode?

8: Why aren't we allowed to talk about the "Arthur Punching D.W." meme in the trivia section of the episode on this wiki and why is the page protected?

9: Why is Desert Island Dish's title card so creepy? It doesn't creep me out, but still.

Yes
No
Make another one of the Character ones