As an Easter egg for season 10, every episode included the number '10' hidden in various locations.[1] All Season 10 episodes have a marked circular 10 icon on the episode title card (U.S. only). This was done to celebrate the tenth anniversary of the series.

While the season was airing, viewers could go to the PBS Arthur website to participate in a related contest: "Arthur's Crazy 10's Scavenger Hunt". (archived page) Kids who successfully located at least ten 10s, as indicated on the downloadable tally form, could submit a completed form to producing station WGBH to be entered in a prize drawing. Three winners received a home phone answering machine message recorded by Buster (Daniel Brochu). Although the contest entry form refers to thirty-seven possible hidden 10s, there are many more visual instances and other references to the number 10 throughout the season, as listed below.

A 10 on the Formaggio Falcon's flag.

A 10 on the Sampo pineapples can.

The Secret About Secrets

A B-10 on the apartment room water meter.

A 10 on one of the wooden doors in the apartment basement.

The number 10 appears several times on the chalkboard.

A hidden 10 on the spacecraft

The Curse of the Grebes

A 10 on the Grebes merchandise. 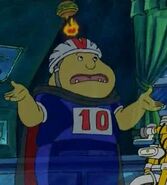 The 10 dresses logo on the box

A 10 at the pizza restaurant.

A 10 on Binky's soccer jersey.

A 10 on Binky's baseball uniform.

A 10 on the Racing Day billboard.

A 10 on Buster's transforming car/boat.

A 10 on the coffee vending machine.

Another 10% poster on the wall.

A 10 on one of the doll assembly machines.