Abraham Lincoln was the sixteenth president of the United States.

A picture of him appeared in the book Arthur's Valentine, along with a picture of George Washington, because the two of them are "February Presidents".

In "Buster's Best Behavior", Buster considers Abraham Lincoln and Arthur to be really great people. Since it would take too long to grow a beard, he decided to be like Arthur instead.

Buster imagining himself as Lincoln 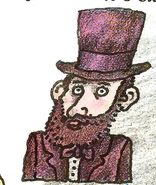 Abraham Lincoln in Arthur's Valentine
Add a photo to this gallery
Retrieved from "https://arthur.fandom.com/wiki/Abraham_Lincoln?oldid=358143"
Community content is available under CC-BY-SA unless otherwise noted.