Alfred (formerly known as Andy and Company) is a TV show that is an inside parody of Arthur itself.

Alfred is not actually a mouse; it is unknown what animal he is. Alfred lives with his family in a mushroom house. His sister C.J. is constantly pestering him, and he always calls his mother instead of solving the problem himself. Andy also has a pet dog.

It first appeared in "The Contest," where Alfred hosted a contest for kids to write their own story ideas and send them into the show. It would take the show 5 years to announce the winner.

It later appears briefly in "Baby Steps, where Arthur and Binky watch it until Mei-Lin distracts them with the piano. In this appearance, it is renamed Alfred, and Alfred and C.J.'s clothes resemble Arthur and D.W.'s clothes respectively. 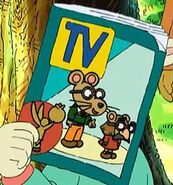 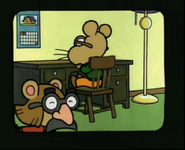 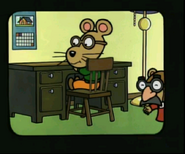 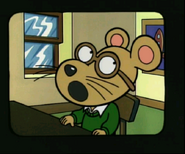 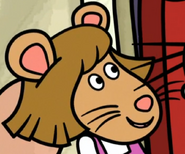 Retrieved from "https://arthur.fandom.com/wiki/Alfred_(TV_series)?oldid=404541"
Community content is available under CC-BY-SA unless otherwise noted.