"All the Rage" is the second half of the eighth episode in the fourteenth season of Arthur.

Muffy tries to come up with fashion trends after watching fashion icon Capri di Vapida on TV, but her ankle purses, edible scarves and fluffy armings don't catch on.

Muffy stands in front of "Muffy's House of Fashion Horrors". She then shows Arthur, Francine and Buster around, deeming Arthur's everyday clothing and Francine's picture day dress ridiculous. Arthur, Francine and Buster move on a bit, and they see one of Muffy's mannequins wearing several garish pieces of clothing. Muffy frantically tries to explain herself as her friends begin laughing.

After the title card, Muffy is seen watching Capri di Vapida on television doing an interview in Venice, Italy. A reporter, Candy Coco, asks Capri what the latest fashion trend according to her is. Capri deems it to be large sunglasses, along with whatever she and her dog, Pixel, are wearing. When Capri says that anything that she and Pixel haven't been wearing lately is NOT "warm", Muffy is shocked and cleans out her closet.

Muffy goes to the charity store, Care to Ware, and donates all her old clothes, for which Buzz thanks her. On her way out, Muffy notices a poodle skirt (from the 1950s) on a mannequin. Buzz shows her another old fashion fad called toe socks (from the 1970s). Muffy then plans to make her own fad. Sue Ellen enters and buys an old hat of Muffy's, which the latter dismisses as "out".

Muffy begins brainstorming and first thinks of the belt. Bailey informs her that that already exists, and he suggests yellow plastic shoes with holes on the top, but Muffy disagrees.

Later, the kids get ready for a race on the Lakewood Elementary School grounds. Muffy comes jogging and shows off her new "ankle pouches". She tries to demonstrate how good they are by claiming they are very helpful to carry money. However, Muffy stumbles and falls down when she tries to take out some money from the pouches, and she misses the beginning of the race.

At The Sugar Bowl, Muffy shows Arthur, Francine and Buster her new fad: the "snack-o-scarf", made of gourmet fruit rolls. However, Buster only cares about eating them. When Sue Ellen enters wearing Muffy's old hat, Muffy is upset that her friend is wearing something which she deemed to be outdated, but Sue Ellen protests that she likes the way it looks. Arthur and Francine agree. Muffy then storms off, vowing to come up with a fad her friends will love while shooing away flies trying to eat her scarf.

The next day, Muffy arrives at the cafeteria wearing "armings". She shows them to Fern, who isn't interested. Muffy then tries to take a lunch tray, but she can't because her "armings" are too stiff.

Muffy is next seen at the lockers, wearing a monocle. She claims that "the monocle is so old, it's new" to Arthur, who shakes his head and leaves. Despondent, Muffy turns around to leave but the monocle impedes her vision, causing her to bump her head against Prunella's open locker door.

Later, Muffy watches Capri on television while icing her head. Capri explains that when she makes her trends, she gets most of her ideas from things around her. Pixel gives her the idea of "nose cones" when the dog accidentally sticks its head into a fallen ice cream cone.

Muffy goes to the playground, where she sees George, and comes up with "designer antlers". She then spots Binky wearing a hat similar to Sue Ellen's. When Muffy is surprised, Binky reveals that almost everyone is wearing them. He assures Muffy that she can get her own hat at Care To Wear, but they're selling out fast. Muffy then angrily tells Sue Ellen off for supposedly stealing her aspirations of being a trendsetter.

Later, a miserable Muffy visits Sue Ellen's house wearing sweats and a cashmere cap. Sue Ellen invites her in for smoothies. As they drink, Muffy decides to give up on fashion, upset that she couldn't create any unique, popular trends. However, Sue Ellen disagrees and reveals it was Muffy who originally inspired her to wear the hat. She brings out a scrapbook with the term, "Muffy-it-up" next to a picture of Muffy wearing her hat once. Sue Ellen explains that she uses the phrase to describe a simple fashion item made fancier. Overjoyed that she made an impact after all just by being herself, Muffy compliments Sue Ellen's outfit before leaving.

At home, Muffy watches more of Capri di Vapida. Capri voices her belief that dog biscuits are now "warm" and taste "yellow" (which she claims is a flavor). Muffy refuses to follow Capri's taste in dog biscuits, which Bailey agrees with. Before going to sleep, she compliments Bailey's red necktie and handkerchief, to which Bailey says he's trying to "Muffy-it-up". Muffy lets out a happy sigh as she falls asleep and the episode finishes. 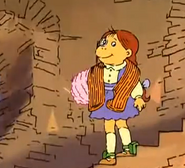 Fern and Sue Ellen in the scrapbook on the right side.