And Now Let's Talk to Some Kids

"And Now Let's Talk to Some Kids" is the second half of the fourth episode in the third season of Arthur.

The Magic Toolbox comes to Mr. Ratburn's class to put some of the kids on TV.

And Now Let's Talk to Some Kids

The kids are all excited and wonder what it will be like to be on TV---except Brain, who's more focused on a Science Fair project. The next day, while everyone else is practicing for The Magic Toolbox, Brain is still focused on his project. This leads Francine to believe that Brain is secretly nervous about appearing on TV. She and the others hatch a plan to see that Brain gets some airtime.

Despite their attempts, Brain is still focused on his Science Fair project and not appearing on TV. The following day, The Magic Toolbox crew shows up to Mr. Ratburn's class. Once he announces to the class that they are going to be asked about the solar system, the class rushes over to Brain's desk and they ask him about the solar system. Each student takes what they have learned from Brain to answer the questions.

A while later, the kids watch their performance on TV, with Arthur saying that they were better than he thought. They're still worried about Brain not being on TV, however.

About 70 years into the future, Brain is shown as a scientist who has invented teleportation, which he tests out on a cat. Older versions of Arthur and Francine watch the event on TV before watching themselves once more on The Magic Toolbox and sing the theme song off-key.

Muffy talking to the cameraman.

Binky is being interviewed.

Arthur and Francine on t.v. 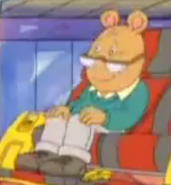