"Arthur's Almost Boring Day" is the first half of the twentieth episode in the first season of Arthur.

Stuck inside on a rainy day, Arthur and D.W. find some fascinating stuff about their parents in Grandma Thora's attic.

We first see Arthur's neighborhood on a very rainy day. Arthur and D.W., both disappointed about the rain, get bored. D.W. wants the rain to stop, and Arthur wonders what everyone else is doing indoors. We see each of his friends at their homes: Buster wants the rain to go away as well, and come back "on a school day" instead. Francine, who wanted to play basketball, disappointedly sings "It's raining, it's pouring" while she watches the rain and her father is sleeping on the couch. She then gets annoyed over his snoring. Brain studies his evaporation map and sings a version of "Rain, Rain Go Away" using scientific terms about rain. Back at the Reads' house, Arthur and D.W. both say, "I'm bored" in unison.

We now see Mr. Ratburn's classroom, on a sunny day, where he tells his class about a homework assignment, but is abruptly interrupted by Francine. She reminds him that it's Friday, and he confirms this on a calendar. To the class's disappointment, however, he says that they will now have a whole weekend to do their assignment. Arthur then watches Mrs. Fink and her class outside. Their homework assignment is to have lots of fun over the weekend. Mrs. Fink and her students frolic in the flowers and cheer. Arthur, wishing that he could have fun this weekend, gets really upset. Mr. Ratburn's assignment is for the class to prepare a short report about what they each do tomorrow. After school, Binky stops Arthur, Buster and Francine, and says that he needs ideas for his report. Buster suggests Binky come to the park with him, Arthur, and Francine. This idea angers both Arthur and Francine. Binky approves, but then quickly declines when he realizes that, if they were to all go together, they would all just end up having the same reports. Francine wonders if Binky's right, but Arthur says that it doesn't matter if everyone plays together all day, they can do different things.

At home, Pal pounces on Kate's playpen while Kate plays peek a boo with him. Arthur and D.W. are sitting on the couch watching TV. They see a cereal commercial, for "Honey Squid", which grosses them out. D.W. asks Arthur what the two of them are going to do tomorrow. Arthur says that they aren't doing anything tomorrow because he's going to the park with his friends. But D.W. gets upset and says that he promised he would play with her. Arthur says he has to do an assignment with his friends, but will play with her on Sunday. In reply, D.W. growls.

The next day turns out to be really stormy. D.W. asks Arthur when he's going to the park, but he says he can't due to the rain. D.W. laughs and says, "Too bad!", pointing out that she can now play with Arthur after all. She drags him to one side of the living room and dumps all her toys onto the floor. Arthur, on the phone with Francine, complains about being stuck in the house with D.W. and her "baby games". While Francine is talking to Arthur, Oliver is still snoring on the couch. Beside the couch are Francine's drums, and she decides that now might be a good time to practice them. After Arthur hangs up, D.W. asks him if he wants to play "Weasel Rally" or "Confuse the Goose". Arthur decides to play Weasel Rally. While he is reading the front of the game box, Pal and Kate are napping peacefully. At the dining room table, Arthur and D.W.'s parents are doing paperwork. Then, things get crazy. Arthur and D.W. start fighting over the game which causes Kate to cry and Arthur and D.W.'s parents to screw up their paperwork. Jane asks what's wrong, while David gets disgusted over his messed up paperwork. D.W. enters the room and tells Jane that Arthur is playing the game incorrectly. He protests and says that he is doing it right. D.W. says he actually isn't, because he's not having fun, unlike the boy pictured on the front of the game box. Jane suggests another game that Arthur and D.W. can play, but Arthur doesn't want to write a report on playing Confuse the Goose. David suggests that Arthur read to D.W., and Jane agrees with this idea.

D.W. has set up Confuse the Goose. Arthur informs her that according to their parents, he doesn't have to play that game. He will, however, read to her. This makes D.W. angry, and she complains to Jane while Arthur calls up Buster. Arthur tells him that things at home are too boring to write about. D.W. angrily says that she's ready for Arthur to read. Buster suggests that, until the rain stops, Arthur watch wrestling. Just then, Arthur sees a weather report on TV. The meteorologist says that it's going to rain non stop for the rest of the month, which puts Arthur in total shock. D.W. complains about how hard it is for Arthur to play just a single game of Confuse the Goose. Arthur starts to read to her. D.W. is unimpressed by the story, and can predict how it ends: everyone lives happily ever after ("Boring!")

While Jane is writing a check, Arthur chases a yelling D.W. with the book, opening and closing it to make it look like a pair of jaws. Jane messes up her check and Kate starts to cry again. Pal chases after Arthur and D.W., barking. Feeling over stressed and super furious, David yells at everyone to freeze. He chastises Arthur for how he's treating the book, but Arthur blames D.W. for not wanting to be read to. Jane suggests they draw. Back in the living room, Arthur draws a picture of a "bored" dog, D.W. draws a stick. Arthur asks D.W. why she drew a stick. She says it's from the park, where he was supposed to take her! Arthur and D.W. get into an heated argument again, causing more havoc and disruptions.

While they are fighting, David holds out their raincoats. When they notice him, they stop; the scene transitions to Arthur and D.W. out in the rain, wearing the coats. David tells them to have fun at Grandma Thora's house before he closes the door. Arthur is not excited about writing a report on spending the day with his grandma. When Arthur and D.W. arrive at Thora's house, she says that this rainy weather is only good for the ducks. Coincidently, they see a family of ducks riding bikes. Thora suggests that the kids help her clean out her attic. Arthur thinks this will be boring, but in the attic, he and D.W. are impressed by all the different kinds of antiques they see. D.W. finds and tries on an orange wig. Arthur finds a baseball player bobblehead that belonged to David, and Thora shows them a pair of David's bell bottom pants, as well as a picture of him wearing them. They even see old movies of how Elwood City used to be like in the past and how Wonderworld Amusement Park looked without rides such as the "Hurl A Whirl". Arthur and D.W. become interested in the history, and Arthur gets an idea for his report.

The next day at school, Francine, Binky and Buster present their reports which turn out to be boring because all three of them just watched wrestling on TV (with Binky adding in how he someday hopes to be a wrestler himself). Arthur's report, however, becomes a hit. He tells his Grandma to come into the room, and she enters with a projector. She shows the class the film about the history of Elwood City. They all become amazed about how things were in the past. Thora also shows footage a high school football game with a high-school aged Mr. Haney cheering the game on, and a high-school aged Mr. Ratburn playing and showing off. Everyone is amazed and shocked, but laugh a little at Mr. Ratburn when he nervously whistles. The episode ends with Arthur glued to the screen watching the rest of the film. 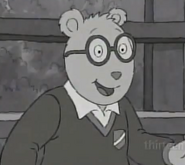