Arthur isn't too sure he wants a new baby in the house, but once Kate arrives, he proclaims that she is pretty cute after all.

This episode opens with the Reads celebrating Kate's first birthday; she puts her face in her cake.

Arthur tells the viewers that babies do some dopey things, but then adds that “we were all babies once” before giving a few examples: his friend Buster who ate unpaid-for food in the grocery store, Mr. Ratburn who drew numbers on the wall at home, and even Jane and David.

Arthur notes that even Kate is growing up, and says he already misses the days when she was a cute little baby. But D.W. argues with him, saying that he actually doesn't. Arthur says he does, and D.W. replies that he didn't even like Kate when she was a newborn. “Did too,” Arthur replies. D.W. doesn't believe him, and says she remembers exactly what happened.

Arthur and D.W. are playing a grape eating contest and she eats the last one when he tries to get it. David calls them to come to him and Jane, who announces that they are going to have a baby. While D.W. is excited about this, David tells Arthur that it will be six months before the baby comes.

Arthur gets nervous because of his friends all being mean and telling him what could happen after the baby is born.

Arthur is having a nightmare. Jane comes into his room and asks him if he's all right, as he was tossing and turning. He tells her that he was having a dream, and she thinks he is as excited as her about the baby coming. The next day, he tells Buster that the baby is almost here. When they see a mom with baby triplets walking by, Buster brings up the possibility of Mrs. Read giving birth to more than one baby. Arthur then daydreams that there are ten babies in the same room with him, which makes him scream. When he gets home, D.W. and Jane are in the living room. D.W. wants to show him how to diaper a baby by showing him her diapered dolls including his Bionic Bunny. He doesn't like that and scolds her for doing it.

Jane shows them the videos of them when they were babies. The first one is Arthur at age one and learning how to walk. Jane tells him that he was a cute baby. "What went wrong?" D.W. asks. Her baby video comes on and she initially looks surprised, saying “That’s me?” Then, D.W. exclaims how adorable she was, and tells Jane that she hopes the new baby will be just like her. Arthur replies that that's what he's afraid of.

Jane is packing her suitcase and tells Arthur that she is ready to go to the hospital at any time now. D.W. gives her a picture of her so that she will have something to look at there and so that she can "make another perfect kid."

The next day, Arthur and D.W. are racing to the bottom of the stairs. She claims she won; he says it was a tie. She laughs and heads to the kitchen. He follows until he spots Grandma Thora making blueberry pancakes. "Grandma Thora, you're in the wrong house," D.W. says. Arthur asks her where their parents are and she tells them that they are at the hospital and reveals that the baby ended up being a girl, meaning that Arthur and D.W. now have a sister.

D.W. is excited and does cartwheels. Arthur is not. At the hospital, they meet their new sister, Kate. D.W. claims that she has Arthur's nose, while Arthur points out she has D.W's mouth when Kate begins to cry. The next day, Jane and David bring Kate home. Arthur is happy, but she often cries every time he gets near her. Arthur assumes that this means she hates him, and he shares this thought with Francine and Buster. Francine thinks that the reason Kate cries is simply because that's what babies do, but Arthur says that Kate doesn't cry when she's with D.W., only when she's with him. One day, Jane leaves him in charge of Kate. When he gives her her pacifier, D.W. warns him that it is dirty, making Kate cry. D.W. cleans it and puts it in Kate's mouth, silencing her. Then the doorbell rings; it's Buster and Francine. D.W. lets them see Kate peacefully asleep, but all of a sudden, she spits out her pacifier and cries. D.W. tries to feed her her bottle, but she still cries, leaving Arthur to take care of her as D.W. goes to get a clean diaper.

Meanwhile, Arthur pats Kate on the back numerous times until she burps. This act bonds them; she messily kisses him on the cheek as her way of thanking him, which everyone watches in happiness.

Kate seen by Arthur and D.W. for the first time 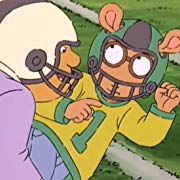 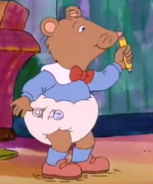