Much to his horror, Arthur discovers that he and Muffy are having birthday parties on the same day—and Muffy refuses to change hers.

Early one morning, Arthur and Francine send out invitations to their friends for Arthur's birthday party. The last invitation to deliver is the one for Muffy. At the Crosswires' campus, Arthur and Francine try to pass the front gates unnoticed to get to the mailbox. Then, as Arthur is putting the invitation in the mailbox, Muffy leaves the house to check on the mail! Francine warns Arthur, and he hides behind a tree. He tells the viewers that his birthday will be ruined if Muffy sees him!

Downstairs in the laundry room in the basement, after Jane takes a pink towel out of the dryer, Pal grasps onto it with his mouth, angering Jane. When Arthur and D.W. come downstairs, Arthur shows Jane the invitations he is giving to his friends.

Arthur picks up Pal, and then uses Pal's paw to count down the remaining days on the calendar until his birthday: May 25. Jane then asks Arthur if he's ready to buy party supplies, and he says yes.

Arthur and D.W. then visit the party shop with Jane to buy some party supplies. D.W. is amazed to see balloons that are square-shaped. Arthur and Jane blow on squeaky party noisemakers. After this, Arthur sees a pinata that looks like Mr. Haney, to his surprise. D.W. shows Arthur a plate with a unicorn on it, but Arthur rejects these plates and prefers Bionic Bunny plates, like the show he enjoys watching.

Back at home, Grandma Thora asks Arthur what kind of cake she would like her to bake, and Arthur suggests chocolate. As he leaves to go to school, D.W. hands him his party invitations. Arthur says he hopes that all the people he'll invite will be able to come to his party.

Arthur then heads to school and starts handing out invitations to his friends. Francine asks Arthur if he would like to play Spin the Bottle at his party, which he is not enthusiastic about. When Arthur gives his invitation to Muffy, she gives him an invitation to her party. Arthur finds out that her party is scheduled for the same day as his!

Arthur asks if Muffy can change her party to another day, but she angrily refuses on the grounds that the entertainment had been booked months ago. Arthur cannot change his party to another day either because all his relatives from Ohio are invited. Muffy then tells her friends that they must decide whose party they should attend.

Outside at recess, the boys: Arthur, Buster, Brain and Binky agree they should all go to Arthur's birthday party. Arthur then asks if the girls were to attend his party, too. Buster angrily decides they don't need girls anyway.

On the playground, Muffy then decides that she and the other girls: Francine, Sue Ellen, Fern, and Prunella don't need the boys at her party either. Muffy suggests that she might end her friendship with anyone who doesn't come to her party.

While they are pulling, Muffy furiously taunts as she angrily yells, "Who needs boys? Pull!" twice, and then Buster furiously does the same back, but he angrily taunts and shouts, "Who needs girls? Pull!" twice. Then Binky ties the rope around his waist, and Prunella does the same thing by tying the rope around one of the bars of the playground equipment. Then both sides break the rope, and Arthur decides that nobody wins the tug of war.

After school, Arthur and his friends go to Mrs. Powers' ice cream shop. At the counter, Arthur tells Francine that everyone is beginning to hate each other as Buster (who furiously pulls his ears down), Muffy, Sue Ellen and Fern angrily blow raspberries at each other.

Francine says that it's boring to have a party without boys. Arthur wishes Francine could come to his party, but Francine promised Muffy, and wonders how she could go to both parties. Arthur says he has an idea, and he whispers it in Francine's ear.

Francine agrees with Arthur's idea, but he tells her that they need to keep it a secret from the others. Then Arthur and Francine go to the tree house to write invitations for the girls. Francine decides to write the invitations herself, so that the writing can look like it's from Muffy. Arthur writes a special note to Muffy. That night, he explains the plan to his parents, whom think it is a great idea.

The next morning, just like in the beginning of the episode, Arthur and Francine deliver the invitations to the girls. When they arrive at the Crosswires' campus, Arthur hides so Muffy won't hear him and Francine.

There are green ducks putting in new grass mats on the Crosswires' campus. Then Muffy and her mother Millicent walk out of their house, and Millicent requests Muffy to go check the mailbox.

In a flash, Arthur puts the invitation in the mailbox. Francine warns Arthur that Muffy is coming and Francine hides behind the fence pole, while Arthur hides under the grass mats. Muffy then rushes to the mailbox, and takes out the invitation that Arthur put in there in less than ten seconds. Muffy then runs to Millicent, and tells her she received a note from Arthur.

Back at home, Arthur's relatives have arrived at his party. Arthur's cousin George hands him the birthday present, but spoils the secret by telling him it's a chemistry set inside, and Arthur thanks him in disbelief.

Arthur's relatives are setting up his birthday party, and then Arthur, now in his best blue suit, receives birthday kisses from Jane and eight birthday hugs from Grandma Thora. D.W. (also dressed in her nice spotted dress) attempts to pinch Arthur so he can "grow an inch" and chases him around the house. Then Arthur's friends arrive: Buster and Brain, then Prunella, then Francine, then Binky, and last but not least, Sue Ellen.

When 12:00 noon arrives, Arthur tells his friends to find some place to hide, because Muffy will arrive any minute. Buster asks Arthur what he wrote to Muffy, and Arthur said he wrote: "Dear Muffy, I have a special present for you. It is so big, I can't carry it by myself. Please come to my house today at noon to get it." The doorbell rings, and Francine reminds everyone to be quiet. When Arthur opens the door, there is Muffy standing in the doorway, and she tells everyone she arrived just for her birthday present, then everyone says, "Surprise! Happy birthday!"

Arthur tells Muffy that her present was too big to carry. Francine then asks what a birthday party would be like without all your friends. Then everyone puts on cone-shaped birthday hats, except Muffy, who is wearing a birthday crown, and Prunella and Sue Ellen who don't wear any hats.

They all start having fun by doing the limbo dance and hitting the clown pinata with a baseball bat. The kids could not get the pinata to break open, so David tries to help them out, but it does not pop open with his attempts either.

As Arthur is holding the cake, Muffy agrees it was a wonderful party, and that they should do it every year, but Jane suggests that they will celebrate the party at the Crosswires' house next year for Arthur and Muffy's 9th birthday.

Francine tells Arthur it is time for him to open presents, and carries a present to him, then tells him he should promise her he will use it right away. When Arthur opens the present, it is revealed to be the Spin the Bottle game.

Francine shows Arthur how to play Spin the Bottle. The objective is to make the bottle spin in one place, and it will point to a certain person. When the bottle points to Pal, he comes right over to Francine and licks her face, to which she pets Pal in response. Meanwhile, in the front yard, David is still trying to open the clown pinata with a chainsaw.

Buster taunts Muffy, Fern and Sue Ellen with a Raspberry

Muffy, Fern and Sue Ellen throw back raspberries at Buster.

If you look closely at the background, Muffy throws her ice cream at The Brain and everyone laughs including Buster

At Arthur and Muffy's birthday party, Francine demonstrates to everyone how to play the Spin the Bottle game.

Muffy arriving at the front door of the Reads' house for her and Arthur's birthday party. 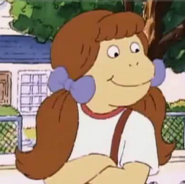