This article is a stub. You can help Arthur Wiki by expanding it. Arthur's Camping Adventure is a video game released in 2000 by the Learning Company and Co-Distributed by Mattel Interactive.

This gives children a chance to join Arthur and the rest of Mr. Ratburn's class on a camping trip. Unfortunately, Mr. Ratburn sprains his ankle - badly - and it's up to Arthur to save the day. Players will climb mountains, travel through forests, find hidden surprises, and lead the class to safety. Activities include pitching a tent, navigating rockslides, river crossings, exploring a spooky cabin, mazes, and building rescue devices. Children can interact with characters, develop critical thinking skills, and enjoy the introduction to wildlife science. The 21 environments include 30 printable scenes and 40 hidden surprises.

Ideas to survive in nature 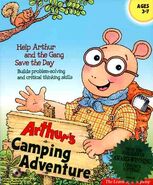 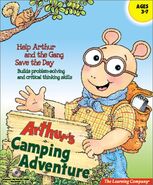 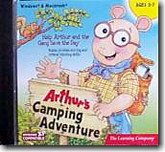