Start a Wiki
watch 02:32
The Loop (TV)
Do you like this video?
Arthur's Fire Drill is a Step-Into-Reading book based on the episode "D.W. All Fired Up". Set at Step 3, "Reading On Your Own," the story is based on material from the episode, but is different in several ways, most notably featuring Arthur in a much more prominent role

When D.W.'s teacher announces that they will have a fire drill, D.W. is afraid the school is going to burn down! So Arthur gives her his fire fighter's hat, a whistle, and a few tips on fire safety, and appoints her their home fire warden. She then sets off to school prepared to take charge.

When D.W. was a baby, Arthur taught her not to touch the hot stove and when she was two, Arthur taught not to play with matches. She's now learning many things from Ms. Morgan in nursery school and one day, Ms. Morgan tells the class that they're going to have a fire drill. She tells them that when the fire bell rings, they should line up at the door, and has them practice the procedure of "stop, drop and roll" outside. When D.W. asks what it's for, Tommy tells her that it's for if your clothes catch on fire.

When D.W. returns home, she tells Arthur she's not going to school the next day because there's going to be a fire. Arthur thinks she's making things up until he realizes she's talking about a fire DRILL. She tells him that she doesn't care what he says; she's not going to school. Arthur goes to his closet and gets out his play firefighter's hat and a whistle. He dresses her up, telling her that they're going to have a fire drill at home and she can be the boss.

He presents some fire safety tips, such as putting a wet towel over your head if you have to crawl through smoke, and to get out of your house quickly, then go to a neighbor's and call 911. D.W. goes into action, heading downstairs and telling Mr. Read, Mrs. Read, and Baby Kate that there's a fire drill. Arthur tells them to just go along with it because D.W. is the fire boss. Everyone, including Pal, runs out. When Mr. Read asks what it's all about, Arthur tells him that it's D.W.'s homework. They practice two more times before Mr. Read says that it's enough and D.W. has Arthur practice crawling through smoke with a wet towel over his head.

The next day, D.W. feels ready, but when she gets to school, she sees a fire truck there and worries the school is on fire. Then, she sees a firefighter in a mask step off the truck and mistakes him for a monster. The firefighter takes off his mask and tells her that he's just a friendly firefighter who's come to talk with her class about how he fights fires. D.W., still in her outfit, tells him that she can help her because she's a fire boss. When D.W. gets home, she tells Arthur that the fire drill was "no big deal."

Differences from the television story 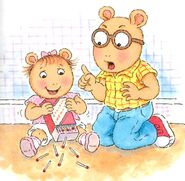 Arthur warns baby D.W. not to play with matches

Firefighter
Add a photo to this gallery

Retrieved from "https://arthur.fandom.com/wiki/Arthur%27s_Fire_Drill?oldid=383656"
Community content is available under CC-BY-SA unless otherwise noted.