Arthur's House[1] is a yellow gable house with a blue roof and two gable dormers where Arthur and his sisters, D.W. and Kate, and parents Jane and David reside with their pet dog Pal, and formerly, Spanky and Toady.

The residence is located in Elwood City. It is twelve blocks away from Buster's condo according to Buster in "Buster's New Friend," but is different on the Elwood City Map on the PBS Kids website.

The house's address is inconsistent, but its location on Main Street was never changed once in the series.

The Read house has a kitchen, a living room, a family room, at least two full bathrooms[2], three bedrooms, a laundry room in the basement, a dining room, and an attic.

Arthur has his room to himself and it has green walls, a wooden floor, cabinets, his bed, many posters including a Bionic Bunny poster, books, and Bionic Bunny merchandise, and its dormer window is on the right side of the house. His room is also the smallest bedroom in the house and close to the front of the house.

D.W. and Kate both share a bedroom and it has pink walls, purple wainscoting, orange carpeting in the books, a wooden floor, toys and dolls, particularly troll dolls, Mary Moo Cow merchandise, D.W.'s bed, Kate's crib, Kate's changing table, and its dormer window is on the left side of the house. Despite sharing the room together, their room is the largest bedroom in the house and also has a window that faces the backyard. They have a large walk-in closet.

Jane and David both share a bedroom, the master bedroom, which is at the back of the house upstairs. The inside of the house has gone through various changes throughout the books: the stairs were originally straight until the book Arthur's Baby changed the stairs to winder stairs. The stairs are white in the cartoon show, but were usually brown in the books. Pal loves to sleep with Arthur and dislikes the garage. In "D.W. and the Beastly Birthday," it is revealed that there is a small room under the stairs — perhaps used for storage.

In the kitchen and dining room, Arthur, D.W., and their parents sit on chairs at the table, and Kate sits in her highchair. The attic is a large wooden room right under the roof and above the second floor, and it is full of cargo and is accessible by the ladder. The laundry room has a conventional washing machine and an electric clothes dryer. David's catering business is in the garage in a kitchen-style area.

In the books, the walls inside the house are often shown to have different colors as they change from one book to the next.

The house is heated by a boiler system using antique radiators, which have a wooden shelf above them. The house does not have much air conditioning. There is an air conditioner in the catering kitchen, which broke in its debut episode, as well as one by Jane's computer seen in "The Blackout."

Back Entrance with Stairs and Foyer

Laundry Room in the Basement

David's catering room in the garage

The Front Yard during the yard sale

The small room under the stairs

The Reads' family home has three entrances: the main front entrance door, the back entrance door leading into the stairs and foyer, and the kitchen entrance door.

The Read family has had two computers in the following seasons. Their first computer was a gray compact case with the monitor mounted on it, although it was later slightly redesigned to have a CD drive. Their current one is a tower with the monitor with integrated audio speakers next to it. It was originally black, then changed to white in the ninth season, and by the tenth season, it is currently turquoise, and is the same iMac G3-lookalike that other characters (Francine, Sue Ellen) also own. Their computers have always had a CRT monitor.

In the 8x8 books, the family also owns an iMac G3, although this time it lacks the additional garments stand, side vents and it is either purple or royal blue.

The Read family has had two models of TV through the whole show. (Three if you count the TV shown in a flashback scene.) 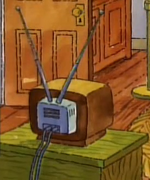 The older TV when Arthur was younger (flashback scene)

Computer from the 8x8 books

The Read family owns two vehicles: a purple 5-door station wagon driven by both David and Jane that they mainly drive to take the family places, and a catering van driven only by David with a symbol of a pot with a face and a chef's hat that David drives to deliver desserts to many customers. The station wagon is usually parked on the driveway while the van is always parked in the garage where David's catering business is run. They also own a dark green minivan in the latest seasons of the show.

Arthur's bike is green. D.W. had a tricycle until she switched to riding on a dark pink bicycle with removable training wheels in D.W. Rides Again! 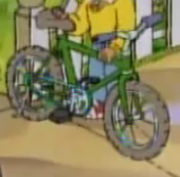 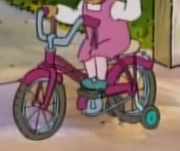 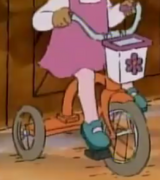 The Reads' pink car seen in "Arthur Bounces Back"