A special pencil seems to be bringing Arthur luck. What will happen when it's been worn down to a stub?

Arthur starts out telling the viewers that all of his friends have something to give them good luck: Francine wears lucky socks during baseball, and her refusal to wash them during a win streak makes other teams hesitate to tag her.

Buster used to have a stuffed bear he thought would give him good luck on tests; however, he spent too much time focused on the bear, and never did the test. Grandma Thora has lucky rituals that help her at Bingo. Arthur thinks none of those were lucky. What is truly lucky is something in his room...somewhere in his room... as we see that his room is a mess.

In Mr. Ratburn's class, Arthur and his friends are watching slides about a fly laying eggs on a decaying banana, with half of the class asleep. Arthur looks out the window at Miss Sweetwater's class, where she is telling the class jokes; their assignment for the day is to come up with a joke. At the end of the day, Arthur and Buster plan to sail a toy boat, but it is raining.

At home, Arthur and D.W. battle for TV rights over heads and tails. D.W. beats Arthur, but he challenges her to two out three, and she beats him again. She watches a show about two cats in love with each other. Arthur decides he would rather do math homework and leaves.

At dinner, the Read family is eating fish sticks. Arthur states he hates fish sticks and that they make him sick. David gives Arthur creamed okra instead, to which Arthur sarcastically remarks, "terrific." He is looking forward to dessert, but Jane tells him that there was an accident. Pal comes in the dining room with his face covered with chocolate ice cream.

The next day, Arthur is walking D.W. to Grandma Thora's. It is raining again and Arthur thinks he is cursed. D.W. dismisses this, saying no one who has a cute sister like her can be cursed. Arthur almost steps onto a pencil, which he picks up. It immediately stops raining as soon as Arthur looks into an eye symbol on the pencil. Arthur drops D.W. off and runs to school.

In class, Mr. Ratburn knows the class did not like the slideshow, so he has something "more interesting" planned, which excites the class, until they find out what he means: a math quiz. The students groan. Arthur grabs out the pencil from earlier and sharpens it.

In the lunch line, Buster tells Arthur to hurry up, as it is Boston Cream Pie day, but they soon discover there are none left. Arthur says he is bad luck, but Mrs. MacGrady comes out with a fresh batch, and gives the boys extra big slices. Buster thinks it is the pencil that has changed Arthur's luck.

Arthur dismisses this, as a lucky pencil sounds ridiculous, and gets his quarter stuck in the soda machine. Buster tells him to poke it through with the pencil. Doing so causes Arthur to get one of each soda flavor.

In class, Arthur is still skeptical about the "luck" the pencil gives, but Buster insists. Mr. Ratburn returns Arthur's math quiz; Arthur got an A. Arthur finally believes that it is a lucky pencil and is thankful that it is his.

Arthur lends Brain his lucky pencil to solve a very hard math problem, to Muffy to complete a hairstyle, to Francine to do her drumming, and to Buster to help him with table hockey. Buster says, "You can do anything with this pencil."

Arthur then daydreams about being president. He signs a law to give $50 million to every school so they can serve Boston Cream Pie to every kid twice a day. Then he dreams about shooting down an alien on the moon. Back in reality, he hears a snap.

Buster has accidentally broken the pencil in half. He sobs and dramatically apologizes, but Binky insists it is still lucky if it is re-sharpened. Buster thinks he lost all of his friends, and continues crying, but Arthur tells him that he is still his friend. Buster thanks him and asks if he could finish the game, as he was winning! Arthur looks at him angrily.

At home, Arthur is measuring his pencil, and it is getting shorter and shorter. He writes to his pen pal with the pencil, but words are not showing. It is because he is not pressing down hard enough. D.W. asks how his pen pal could read it. Arthur replies it will bring him good luck and it is the thought that counts.

At school, Francine asks to borrow the pencil because Brain is beating her at tic-tac-toe. Arthur tells her no, and that he will only use it if absolutely needed. Francine calls him a "luck hog."

At The Sugar Bowl, Buster says Arthur should only use the pencil in emergencies. Arthur agrees, like if he was bitten by a snake or something. A waitress asks them if they are interested in entering a milkshakes for life sweepstakes. Buster shakes and asks Arthur for the pencil, but Arthur refuses, saying that he will not be president if he gives it to Buster.

At home, the pencil is now a stub. Arthur says he cannot use it and he should hide it where not even he will think to find it. At school the next day, Francine refers to Arthur as a luck hog again while talking to Binky. Binky replies, "I bet he won’t even give it to his own grandmother."

Mr. Ratburn tells the class he hoped they were studying for the history test. Buster asks for the pencil, but Arthur will not give it to him, saying Buster will just have to study. Muffy asks Arthur how much money he wants for it. Arthur says that it is not for sale and not even he is going to use it. That night, Arthur is studying for the test the next day.

He thinks about using the pencil and looks for it in his bed, but it is gone. He accuses D.W. of stealing it, but she denies it, asking what she would do with that "silly little thing." Arthur thinks she would use it to be famous or get all the toys in the world and tells her to give it up. D.W. tells him she does not have it and that he probably put it somewhere.

Arthur rushes into his room and looks everywhere for it, throwing everything out of his cabinets. Arthur calls himself doomed since he cannot find his pencil and he will never have good luck again.

The next day, Arthur rides his bike to school, doubting he will succeed the test. In class, he takes the test with a regular pencil. At lunch, he tells Buster to stay away from him because he is unlucky again. Buster does not care and says it is alright and he likes Arthur anyway. Buster is then surprised to see that the cafeteria has Boston Cream Pie for the second time that week and takes three slices, one for Arthur and two for himself.

Back in class, Arthur gets his test back, and it is revealed to be an 'A'.

At home later that day, he tells Pal he might not ever see the pencil again; he even adds that he thinks he is so good at hiding things, he could get a job doing it. Jane then asks D.W. and Arthur to bring their trash down. D.W. asks Arthur if he ever found the pencil, and Arthur says that he has not, but does not need to. He brought the luck himself, and tells D.W. that she will understand when she is older. D.W. asks him if he is sure he does not need it anymore. Arthur tells her he is positive. D.W. reaches in the trash and grabs the lucky pencil, saying she will take it. Arthur realizes he put it in the trash can. D.W. tells him it is too bad he does not want it anymore, and that now, she will have all the good luck. Arthur tells her he was just joking and starts chasing after D.W., trying to get his pencil back as the episode ends. 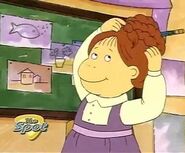 Muffy using the Lucky pencil to hold her hair up. 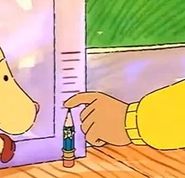