"Arthur's New Year's Eve" is the second half of the thirtieth episode in the first season of Arthur. It is the season finale.

On New Year's Eve, Arthur and D.W. are determined to stay up until midnight to see what occurs.

Arthur has never stayed up until midnight on New Year's Eve, because his parents have always told him that he is too young. He has tried a couple of times on his own to stay up, but has fallen asleep before midnight each time he tried; therefore, this year he chooses not to even try to stay up until midnight.

On New Year's Eve, Arthur is making his bed when Pal jumps on it, wanting to play. Jane comes in and tells him that she and David are going out for New Year's Eve, and that Grandma Thora will be babysitting. D.W. comes in and asks Jane if she can stay up until midnight and Jane tells her that she's too young. She, however, gives Arthur permission to stay up until midnight, but he says that he is not going to.

Arthur and Pal then go outside to play in the snow and Prunella stops by and asks Arthur if he is going to stay up to see the green flash. She explains that at midnight on New Year's Eve, there is a green flash in the sky, which is a sign that the new year has successfully started. However, if there's no green flash, it has to stay the same year again.

Arthur then goes to the Barnes' house and tells Binky about the New Year's Eve Police, but Binky says that there isn't any New Year's Eve Police. He says that on New Year's Eve at midnight, there's this wrestling show that comes on T.V. where this baby (representing the new year) and this old man (representing the previous year) fight and if the baby wins, the New Year begins but if the old guy wins, the baby has to go and live with a groundhog and there's six more weeks of winter. (Binky obviously is mixing it up with Groundhog Day.)

Arthur then goes to Buster's condo and tells him about the wrestling show to which Buster says that's the silliest thing that he's ever heard. Buster then shares his theory on where all the parents go to on New Year's Eve. He says the parents talk about all the rotten things they did to their kids the past year, and plan new awful things to do to kids the next year.

Back at home, D.W. develops a plan to stay awake till midnight which involves pinching herself and dropping ice cubes down her back. Later that evening, their parents go out, leaving Grandma Thora in charge of Arthur and D.W. D.W. gets out her alarm clock and ice for her plan, and begins to hypnotize herself with her clock. Meanwhile, Grandma Thora and Arthur are thumb-wrestling when thew see D.W. getting a glass of water. Later, Thora and Arthur are playing Go Fish when D.W. goes to get another drink of water. Back in bed, D.W.'s feeling tired, so she sends an ice cube down her back, which makes her jump around and yelp. Meanwhile, Grandma Thora and Arthur are using their noisemakers for a practice run when D.W. comes in, saying she had a nightmare. Thora lets D.W. join her and Arthur to await midnight. Arthur falls asleep on Grandma Thora's shoulder at 11:30. Half an hour later, Grandma Thora is unable to wake up Arthur, and it reaches midnight, without anything fancy happening, much to D.W's chagrin. However, she feels better when Arthur wakes up and she gloats to him, telling him about all the amazing things that he just missed.

Arthur is sad he missed New Year's, but he cheers up after Grandma Thora tells him that as long as he remembers all the things he did in the past year, he didn't miss a thing, because that is what New Year's Eve is really about. Arthur thinks about all he and his friends experienced, and feels better. He even wishes Pal a Happy New Year, and adds that maybe next year, they will see all the cool stuff his friends mentioned (like the green flash, the wrestling and the New Year's Police). 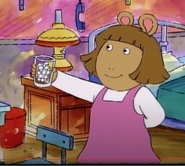