Arthur Wiki
Register
Don't have an account?
Sign In
Advertisement
in: Episodes based on books, Arthur episodes, Season 1 episodes, Episodes with songs

"Arthur's Spelling Trubble" is the second half of the second episode in the first season of Arthur. It is based on the book Arthur's Teacher Trouble.

Arthur enters the school spelling bee, but becomes nervous when he makes it to the finals with the smartest kid in his class and last year's winner.

Arthur is hiding backstage at the Spellathon. He asks the viewers if they have ever been nervous to do something that was important to them. He imagines himself as Benjamin Franklin doing his famous lightning and kite experiment.

Francine, as his wife supposedly, worries over him. But he is determined to go through with his experiment. A lightning bolt strikes the kite, causing it to travel down to Arthur, shocking him.

In the present day, Arthur admits he shouldn't be afraid of something so little, but then Mr. Haney calls Arthur to stage, and he becomes nervous again.

Arthur, Francine and Prunella are walking down the hall and greet Mr. Haney, who is polishing the Spellathon trophy. Prunella boasts about how she won last year's contest with the word endurance.

She asks Arthur if he can spell it. He attempts to, but fails to do so. Class begins and Mr. Ratburn gives the announcement to the students that they will have a spelling test.

He asks them to study thoroughly, for whoever wins gets a surprise. After school, Arthur, Buster, Francine and Brain wonder what the surprise is going to be. Buster guesses that it will be less homework.

This inspires the others to study hard. Francine studies at home with her movie star glasses. Brain attempts to memorize how to spell antidisestablishmentarianism, but keeps forgetting how many i's are within it. His dad advises him to skip that word for now. Muffy uses a computer spelling simulator and spells dog. Buster is sitting in his chair studying but eventually becomes bored.

He gets an idea and buys a lucky charm. Arthur shows his dad, who is making a model of a bodybuilder out of meat, a song about the first word in his spelling book which is aardvark.

Arthur goes to his tree house and studies, although he is just singing the rap of one word ("aardvark") over and over. D.W. arrives, but Arthur tells her to not bother him because he's studying. D.W. thought that he had ants in his pants, due to his leg movements.

He tells her again to leave. She does so, thinking that he is a grouch. Arthur resumes studying and is interrupted by Buster. Arthur asks him if he is done studying. Buster claims he doesn't need to study, for he has his good luck charm, and asks Arthur if he wants to go to the arcade.

Arthur isn't sure and thinks he should study more. Buster tempts him by telling him that he is not the spelling type (rather, he's more of a "go-have-fun-type") and that the arcade has a new game that flips you all around. Arthur eventually agrees.

On the day of the spelling test, Buster asks Arthur if he's ready, but this rather has Arthur worried, for he forgot about studying. Mr. Ratburn has the spelling test begin, and so far all the students, except Brain, have spelled incorrectly.

Arthur considers getting out of spelling, and thinks he could raise his body temperature by getting closer to the heater, therefore being sent to the nurse. However, it's too late, as it's his turn and Mr. Ratburn asks him to spell aardvark. Arthur then briefly does the rap of the word, spelling "aardvark" correctly. Francine's turn comes and she has to spell pleasant, but she spells it incorrectly as pleasent, discouraging her.

The bee is over and only the Brain and Arthur have won. Mr. Ratburn announces that the surprise is that they will participate in the Spellathon, which shocks Arthur. After the bell rings, Arthur suggests to Ratburn that he himself should not be in the contest and admits that "aardvark" was the only word he studied.

Mr. Ratburn encourages Arthur to give more effort if he wants to do well in the Spellathon. Back at home at dinner, Arthur's family volunteers to help Arthur in any way they can, although D.W. doesn't apply. Later, Arthur is studying in his room, and D.W. prepares to annoy him, but their mom stops her and bribes her with ice cream.

The next day, when Arthur is again studying in the tree house, Buster comes and asks if he wants to play football. But this time, Arthur declines this and spells "sorry".

At home again, Mrs. and Mr. Read try to feed Baby Kate, while Arthur is studying, but he thinks he isn't getting any better. His dad tells him that he probably is getting better without realizing it.

He asks Arthur if he wants something to eat. Arthur answers and spells absolutely, then checks his book and is happy to see that he spelled it correctly. He continues studying. Just then, the doorbell rings. D.W. answers it and it turns out to be Buster and Francine wanting to know if Arthur can play.

D.W. says Arthur's still 'exercising his brain', but that she's available. Arthur is then shown walking down the street, still reviewing his book. Brain greets him, and Arthur asks how his studying is going. Brain says that it's going well and that he is now getting computer equipment for a program he is making in his spare time. The fact that Brain has any extra time amazes Arthur.

That night, Arthur is brushing his teeth when D.W. walks up to him and asks him to spell "toothpaste", and he does so correctly. The next day, he continues studying and hears Kate say "glooba". Arthur spells this once again correctly, which confuses Kate. The moment of the Spellathon has arrived. Grandma Thora helps Arthur with his suit. He is also very nervous, but Grandma Thora encourages him.

Mr. Haney wishes them good luck and calls Brain to the microphone. Mr. Haney asks him to spell "fear", but Brain doesn't respond, for he is very nervous. He eventually attempts to spell the word, but he incorrectly spells it as "fere", possibly due to nervousness.

Some time later into the contest, a girl attempts to spell "pieces", but improperly spells it as "peices". Prunella's turn comes and she has to spell "champion". She claims this is easy, for she sees her last year's trophy every day, and spells it correctly.

Arthur's turn comes. His word is "suggest", and he spells this correctly. Prunella mocks Arthur, thinking she is unbeatable. Her turn comes again and she is made to spell "preparation". She is uncertain and asks Mr. Haney for the definition.

He grants her request and defines it. She attempts to spell it, but spells it as preperation, and is shocked to see that it was incorrect. Arthur comes up again and is asked to spell preparation.

He spells it correctly and wins the Spellathon trophy. After the contest, Buster is very glad for Arthur, while Arthur is very relieved that it's over. Mr. Ratburn congratulates him and says that he knew he could do it. D.W. comments that now Arthur knows this as well.

“There! Now I can really concentrate.”

“You're more the go-have-fun type.”

"That is incorrect. You may sit down." 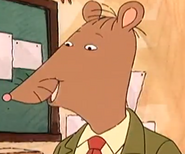 “I know you can do well at the Spellathon.”

“Are you bribing me?”

"How should I know?"

“Welcome to the All-School Spellathon.”

"Yeah, but now he knows he could do it."