Arthur tries everything to get his loose tooth to come out.

Arthur has a loose tooth, and is trying to make it fall out by using the trick that involves the bathroom door with string tied to the tooth; however, the technique is not working for him at all. David is annoyed from the slamming of the door. Jane tells Arthur that his loose tooth will fall out when it's ready. David tells Arthur to cease his horseplay. D.W. realizes that he is acting weird. Arthur agrees, and then tells all the viewers that if they were 8 years old and still had all their baby teeth, they would be desperate as well.

One very early morning, Arthur is sleeping. When he bites down, he feels a tooth becoming loose. He gets up and wakes his parents up to announce that his tooth is about to fall out soon.

At school, Arthur tells Buster that he has a loose tooth. Francine sneezes and loses a tooth. Mr. Ratburn comes in and realizes everybody has lost a tooth except Arthur. He turns on a TV to show a video about teeth. Later at lunch, Francine demonstrates some tricks she can do with her missing tooth, including placing her drinking straw through the gap and whistling through her teeth while closed. Francine demonstrates another trick, by doing a spit-take by squirting out juice from the gap of her teeth. Buster, Sue Ellen, Muffy, and Binky do the same as well. Arthur tries, but the juice just falls out of his mouth instead.

At home, David asks Arthur if he would like some milk and cookies. Arthur initially declines, but soon changes his mind when he finds out that the cookies are crunchy kinds. Arthur also makes a request for dinner. At dinner, Arthur's request is revealed; He eats some extra well-done steak. Arthur notices that his loose tooth is still there. Arthur then eats some corn on the cob. Arthur decides to have a couple of things for dessert; peanut brittle and rock candy.

D.W. tells Arthur to turn into a shark to attempt to get rid of the loose tooth instantly; their teeth always fall out and grow back. D.W. says she learned about this at an aquarium, and shows Arthur a shark tooth necklace that she got. Arthur has an idea.

The next day at school, Arthur arrives and some of his friends tease him for still having all his baby teeth. Arthur claims he in fact lost a tooth, and attempts to trick them by holding D.W.'s necklace in his fist, showing off just the tooth-part. Arthur's ruse doesn't last long, as Francine pulls the tooth away from Arthur, revealing the necklace. During art, Arthur wants a physical punch to the mouth, but Buster refuses to do that. During gym, Arthur tells Binky to punch him, but Binky finds he is unable to do so as well.

Later that day, Brain shows Arthur a machine he built to remove a tooth, but it starts malfunctioning and ends up walking outside. Brain self-destructs the machine and notices that it isn't 100% perfect.

That night, Arthur tries to get the tooth out but the doorknob falls off with such amount of force. He tells his parents his tooth is getting looser, and they say he should go to the dentist.

Later, at the dentist, Arthur is called in for his appointment. He tells the dentist that he still has all of his baby teeth. The dentist notices his stubbornly loose baby tooth. He tells Arthur that having baby teeth doesn't actually make him a baby literally, and that he himself didn't lose his first tooth until he was nearly nine: “Everyone is different.”

The next day at school, Arthur tells his friends that some people don't even lose their baby teeth until they're nine years old, and everyone is actually different. Francine plans to play a game of "Tooth Fairy" where Francine poses as the Tooth Fairy. She decides to not invite Arthur in the game. Arthur tells Francine, "If you ask me, now you're being the baby." Buster and Sue Ellen agree with Arthur. Fed up with how she's been behaving, Arthur and his friends walk off, except Francine, who tells them she is the Tooth Fairy, and they can't leave her. Disgusted, she throws the ball at the monkey bars, which bounces back and hits Arthur in the face. As a result, Arthur has now lost his tooth. Francine realizes her mistake and apologizes, and an impressed Arthur notices that it was "just what he needed" and gives her his lost tooth. Francine asked about this and Arthur reminds her that she's a tooth fairy and needs to give him 25 cents to keep it, much to Francine's surprise. Francine then smiles. 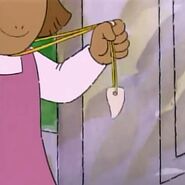 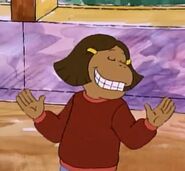