Arthur is a Canadian-American animated educational children's television program. It is based on a book series of the same name, created by Marc Brown in 1976. Brown himself, as well as some of his family, has been heavily involved in the show's production. The TV series debuted on October 7, 1996 on PBS, making it the longest-running animated children's television series as of 2022[1][2][3] and the second longest-running animated show behind The Simpsons. On July 27, 2021, it was announced that the final season of the series will air in 2022.[4][5] The final episodes aired on February 21, 2022,[6] which marked the end of the original broadcast run of the series on PBS; however, reruns will continue thereafter.[3] It has won numerous awards, including several Emmys, the George Foster Peabody Award for Excellence in Broadcasting, and a BAFTA.[7][8]

Aimed at viewers between the ages of 4 and 8, Arthur's goal is to help foster children's interest in literature and to encourage positive social skills. Each episode follows an anthropomorphic 8-year-old aardvark named Arthur Read and his family and friends through engaging, emotional stories that explore issues faced by children, like bullying and losing baby teeth, while also addressing with more nuanced topics, such as cancer,[9] bed-wetting,[10] adoption,[11] video game addiction,[12] etc. It is a comedy that tells these stories from a child's point of view without moralizing or talking down. Situations on Arthur develop in realistic ways, and don't always turn out as people or Arthur and his friends might think.

The original broadcast run of Arthur in the United States on PBS lasted from October 7, 1996 to February 21, 2022. The series continues to air reruns during the daytime kids' block, as well as the PBS KIDS Channel. It has consistently earned high ratings on public television.[13] PBS offers select episodes on the Arthur website for free, and many seasons are available to stream on Amazon Prime Video. There are over 100 countries around the world that air the program.[14]

Development for the show started as early as 1993, when Carol Greenwald began working with Marc Brown to adapt his books to animation for public television.[15] He had previously turned down several similar offers presented by other commercial networks.[16]

After securing adequate funding, the series was produced by Cinar (later Cookie Jar Entertainment, which was acquired by DHX Media, now WildBrain). In 2012, the production of the series shifted to 9 Story Media Group[17] and finally Oasis Animation.[13] It has been a co-production of WGBH throughout the duration of the show.

For the first fifteen seasons, the show used traditional hand-drawn animation, with only the coloring done digitally. Beginning with the 16th season, the show was created using digital computer animation software, such as Flash and Toon Boom.[18][19] This also coincided with widescreen, high-definition broadcasts on PBS (where available), though this 16:9 option had been available in some non-U.S. markets since Season 12.

Production of the TV series ended in 2019.

The characters in Arthur are self-aware that they are on television. For example, in many opening scenes Arthur narrates to the audience. The opening theme song also features D.W. flipping through an Arthur book, and then seeing him on television.

Characters have referred to members of the cast and crew in Arthur, such as Buster saying, "Roll the tape, Greg!" in "Crushed," referring to Greg Bailey, the director of the show.

Likewise, music from the series is known by the characters. In "Breezy Listening Blues," Arthur hears a slowed down version of "Believe in Yourself" and says, "I've heard this somewhere." In "D.W., Dancing Queen," Binky quotes lines from the same song. When D.W. asks if he made it up, Binky replies, "No, I heard it somewhere, but I can't remember where." As well as this, D.W. hums a few bars from the song in "Mom and Dad Have a Great Big Fight."

At the end of "The Making of Arthur," the episode suggests that Matt Damon and Arthur begin making the series after Matt sees Arthur's one minute video. This creates a paradox in which the creator's work is creating itself. 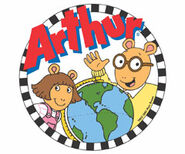