We enter Buster's home and into his bedroom. We see Buster drinking a soda and dressed up like a detective. He tells the viewers about how he solved his first mystery. "It involved my pal Arthur, some missing quarters, and a whole lot of trouble." he says.

He further explains that he was snooping around for any mysteries, but has no luck so far. He also tells Arthur that there's a 3rd Grade Annual Picnic next Friday. Yet Arthur already knows, for there have been posters about it for two weeks. Buster yet stays determined to find one. Arthur hurries off to Mrs. MacGrady's kitchen to give the quarters, but Mrs. MacGrady is talking on the phone about what the new fire department dog should be named.

Arthur tries (unsuccessfully) to get her attention, but since he's in a hurry, he leaves the bag of quarters on the counter and leaves. Later that day, Buster and his mom walk to the arcade, while Buster looks around with his magnifying glass to find anything suspicious.

His mom, as usual, is over-concerned about him getting eyestrain. Buster sees Arthur playing a pinball game and notices that he has beaten the high score.

Buster is very proud of him. The next day when they both are at school again, Buster is still rather proud of Arthur's accomplishment as they walk down the halls. They suddenly meet up with Mr. Haney and the other school staff.

Mr. Haney reminds Arthur to give the quarters to Mrs. MacGrady. Arthur says that he already did, but to their surprise, Mr. Haney claims that she never received them. Buster suspects they were stolen. Mr. Haney asks Arthur if he brought them home by accident. Buster explains that Arthur and he went to the arcade and that Arthur beat the high score on pinball.

He further talks about how he did that once and that it cost him all his birthday money, a large amount of quarters. Instantly in reaction, this story has Mr. Haney and the others suspect Arthur stole the quarters.

Arthur is sent to the principal's office, where Mr. Haney and Miss Tingley punish Arthur by giving a week of detention, starting that day, and that he couldn't go to the picnic. That afternoon in the cafeteria, Arthur exclaims to Buster how everybody thinks he's a criminal, and demands a lawyer.

Buster thinks that's a preposterous idea and claims he needs a detective, like himself. Not sure if he can do it, Arthur decides to let him investigate.

The first person that Buster questions is Mrs. MacGrady. He asks about her whereabouts yesterday. She says that she was in the cafeteria, making brownies for the picnic. Buster suggests he should taste some of the brownies, but she knows what he's thinking and won't let him until the picnic.

Mrs. MacGrady also tells Buster that Mr. Morris came over to mop up brownie mix when it overflowed. She suggests he should ask him if he knows anything.

Thanking her for her information, Buster leaves while snitching some whipped cream off a slice of pie she was making. Mr. Morris goes to his closet to grab a bag, while Buster disguises himself as one of the mops in his closet.

Mr. Morris notices him and Buster begins to question him, but he promptly trips over a mop. While Mr. Morris is washing the windows, Buster comes along. Mr. Morris explains to him that he went to Mrs. MacGrady's kitchen to clean up a spilled mix.

Buster further asks if he cleans after her often. Mr. Morris claims that she's actually quite tidy. While he walks away, Buster hears jingling in his pocket. He suspects that it's quarters.

Mr. Morris shows him that it's just his keys. Stumped, Buster decides to go to Arthur's house for more information. He begins to question D.W., although D.W. doesn't help much, but suspects Arthur buried the quarters somewhere and suggests to dig up the lawn. Buster begins to leave just at the same time as Arthur returns home.

He asks how the mystery is going. Buster nervously claims it's going fine, but Arthur is desperate to be proven innocent. Walking home, Buster looks over his information, but is disappointed to see that everything seems to claim that Arthur is the criminal.

Buster thinks it is possible that he is really a mastermind and that he did steal the quarters. Later that evening, Buster doesn't eat much as usual for he is too busy thinking. He goes to his room and looks over the suspects: Mrs. MacGrady, Mr. Morris, and Arthur.

Suddenly, his mom walks in and tells him to get to bed. "You need your sleep, you're not a robot," she says. This gives Buster an idea. The next day, Buster goes to Arthur's house and tells him that the quarters were taken by an army of robots.

He thinks that they need metal for fuel and no one ever sees them because they can change into any shape. But by now, Buster doesn't think that's probable. On their way to school, Buster apologizes to Arthur for being a bad detective and comforts him by knowing he's innocent. Arthur thanks him for trying and admits he's a bad detective, but a good friend. All the students are already lined up by the bus for the picnic.

Buster gets in line, but Arthur is sent by Mr. Ratburn to the classroom for detention. As the kids are getting onto the bus, Buster is rather sad that he couldn't think straight enough to figure it out. Brain tells him that he feels the same way when his brain is overflowing with data when working on a difficult math problem.

At the mention of overflowing Buster gets another idea and runs into the school with Mr. Haney. They run down the hall into the kitchen where Mrs. MacGrady is preparing food. Buster asks again about her brownie mix overflowing.

She claims that she just made too much, but Buster knows the answer, "There was too much because there was one extra ingredient: Quarters." He takes hold of one of the brownies, breaks it in half and out flies a quarter. Mrs. MacGrady realizes that she accidentally mixed the bag of quarters Arthur left with the bag of flour.

Back at the parking lot, Buster announces that Arthur is innocent. With joy and excitement, all the students run to the classroom, where Arthur was in detention. Arthur hears the crowd of students (from the intro) and hides behind the table.

The doorknob turns and opens with all the kids, including Buster cheering for Arthur and they take him to the school bus. Arthur is happy too for Buster's accomplishment. The kids get into the bus and they leave for the picnic. Back in Buster's bedroom, Buster is finished telling his story. 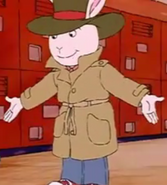 Retrieved from "https://arthur.fandom.com/wiki/Arthur_Accused!_(episode)?oldid=403022"
Community content is available under CC-BY-SA unless otherwise noted.