Arthur Loses His Patience is the eleventh book in Arthur's Family Values, a series of Arthur book titles aimed specifically at teaching morals. The moral of the book is "Being Patient." The book was written by K. Emily Hutta and illustrated by Chu-Ying Chow.

Arthur loses his patience with D.W. and her idea for a special anniversary present.

D.W. is driving Arthur nuts by continuously playing the song "Crazy Bus" but insists that the music helps her to think as she makes an anniversary present for their mom and dad. Desperate to get relief from the song, Arthur agrees to help her out to make the project go faster, but soon grows impatient. He begins making excuses to avoid helping her until finally he sees just how much the project means to her.

Arthur is being driven nuts by D.W., who is continuously playing the tape of her favorite song, "Crazy Bus." When he asks if she could listen to something else, she says that it's her favorite and helps her do her work, explaining that she's making a shoebox diorama to give to their mom and dad for their anniversary. She says that she'll stop playing the song just as soon as she's finished. Arthur notes the mess in the area and that it's not likely she'll be finished for a while, then says that he'll help her, as he'd do anything to stop her from playing the song.

They begin and D.W. tries to give Arthur instructions on what she'd like for the project, but Arthur just scribbles to color the box, hoping to get things done as quickly as possible. D.W. says that it is not right and adds some spots, then says that she's going to add beads to it. She tries to carefully add beads, each facing the same way, but Arthur just glues on a big glob. D.W. thinks it looks terrible, but Arthur leaves to watch The Bionic Bunny Show, saying that he'll continue helping her tomorrow.

The next day, however, Arthur has another excuse, saying that he has to meet Buster at The Sugar Bowl. The day after that, D.W. finds him dressed in his soccer uniform, claiming he has a big game. Two nights later, Arthur again hears the "Crazy Bus" song coming from D.W.'s room and her sniffling.

D.W. is in a bad state because her mom and dad's anniversary is tomorrow and her present isn't going to be ready in time. She tried to create a Cloud Kingdom with a rainbow and two unicorns for her diorama, but the unicorns don't look like unicorns. Arthur helps her, showing her that they can fixed with just a little work. He helps her to create the clouds, place the rainbow, and when she plays "Crazy Bus," he doesn't complain, but just hums along. Finally, D.W. declares the project to be finished and both of them chuckle at each other and how silly they look, as they're both covered with feathers and paper scraps.

The next morning, D.W. gives her mom and dad their present. Both are delighted, and D.W.'s mom asks if she did it all by herself. She admits that Arthur "helped a little," and Arthur quips that "Crazy Bus helped a lot." 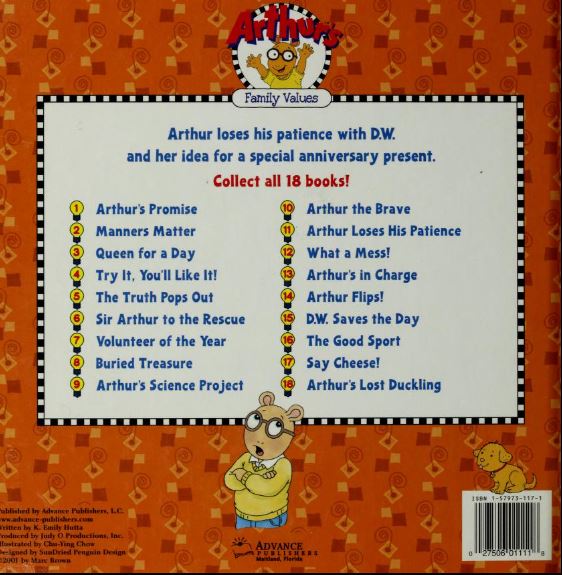 Back cover
Add a photo to this gallery

Retrieved from "https://arthur.fandom.com/wiki/Arthur_Loses_His_Patience?oldid=405666"
Community content is available under CC-BY-SA unless otherwise noted.