"Arthur Makes Waves" is the first half of the sixth episode in the ninth season of Arthur.

The community pool is closed for repairs, so Arthur and D.W. accept an invitation to James' pool. Arthur ends up discovering that his old nemesis, Molly, is James' older sister.

Buster talks about how some kids can't get along. The Tough Customers and Arthur's friends are then seen arguing as cavemen, farmers and ranchers, and as teenagers from the 1950s.

On a very hot day, Arthur and D.W. go to the community pool but find it closed for repairs. They try the Tibbles’ pool, until the Tibbles wreck it. At Muffy's pool, she makes them work her pedalo. Grandma Thora takes them to the Senior Center pool, but the water there is too warm. They try the normally air-conditioned library, but the air-conditioner there is broken.

On their way home, they come by the house of D.W.'s friend James. The MacDonalds do have a pool and Mrs. MacDonald lets the children play in it. James' sister Molly (the Tough Customer) wants to stop them, but D.W. refuses to leave.

Molly talks to Rattles on the phone. He advises her to make Arthur's stay unpleasant, so he will not come again.

Molly banishes Arthur, D.W., and James to a small section of the pool, but they have so much fun that she relents and plays with them. She teaches Arthur to throw a basketball, and Arthur teaches her to squirt water from her palms.

After swimming, they get ice cream at The Sugar Bowl. When Rattles walks in and sees Molly with Arthur, she is embarrassed. Arthur makes it look like she had forced him to buy her ice cream because he used her pool.

At the park, Arthur and Molly agree to pretend not to like each other when their other friends are around. Muffy sees them shake hands.

Muffy tells her friends that Arthur and Molly are in love. Buster visits Arthur to see for himself. Just then Molly brings Arthur a ball. When she sees Buster, she pretends to be angry at Arthur. Arthur tells her to meet him at the library.

At the library, Arthur gives Molly a book on finger tricks. When Slink walks by, they pretend to dislike each other, then they go to play basketball. Both Brain and Slink see them walk together.

When they do not find Arthur with Molly they are satisfied. Together, the third-graders and Tough Customers go out for a milkshake to celebrate not becoming friends. When they are gone, Arthur and D.W. pass by on their way to the reopened community pool. Arthur and Molly playfully trade insults but part as friends. 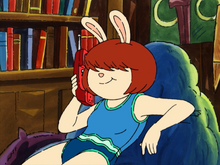 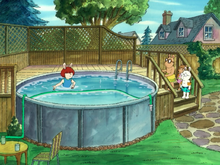