Arthur needs to write a story for homework, so he plans to write about how he got Pal. D.W. tells him that it's boring, so he starts changing around a few details.

The episode opens with Arthur writing a story for his class. He is confident of making one that the entire class will enjoy. Arthur then daydreams that Mr. Ratburn is so astounded by Arthur's story that he takes him to Mr. Haney's office to show the staff what a natural writer he is. Mr. Haney and the others present are equally impressed, and Mr. Haney makes a call to immediately have Arthur's story published. Arthur then pictures himself signing autographs at a book store for a line of fans stretching around the block, only to have his daydream interrupted when D.W. comes in and points out that he has nothing written yet. Arthur sends her away for having distracted him. Arthur then returns to work, realizing that while he wants everyone to enjoy his story, first he has to actually write it.

The episode then cuts to Arthur's class earlier that week, where Mr. Ratburn is outlining another list of things the class will be quizzed on the following day as they're doing math. Meanwhile, Arthur notices Mrs. Fink in the next classroom, who's only homework for her class is to find two words that rhyme so they can make a song of them the next day. Arthur returns to his work when Mr. Ratburn catches him focusing on the other class rather than math. Mr. Ratburn then assigns the class to write a story to present on Friday, fictional or nonfictional. The class is soon dismissed and they begin discussing their ideas for stories. Meanwhile, Arthur overhears Mrs. Fink's students coming up with their rhymes, finding their assignment to be ridiculously easy.

On the playground Arthur, Francine and Buster all discuss story ideas. Francine says she has a hard time choosing what to write because she has too many good ideas to work with. Some of the ideas she comes up with are already existing stories though, though she claims she's not aware of any of them having already been written. Buster asks what Arthur plans on writing, and Arthur simply guarantees that it will be "the best story in the class". At home, he gets straight to work, only to be distracted by D.W. who keeps looking over his shoulder out of curiosity. Arthur gets annoyed but when D.W. says she's just interested in what he's writing, Arthur says that his story is about how he got Pal. D.W. immediately says that it's not a story and that it's just something that happened. Arthur reminds her though that he ran a whole pet business by himself to raise the money to get a dog, and had to take care of Mrs. Wood's cranky dog Perky who gave birth to Pal. D.W. insists that it's a very boring story, and says that his life is too dull to be told to the class. This has Arthur worrying and he has second thoughts about what he's writing. D.W. suggests that instead it should be about having an elephant for a pet, so Arthur imagines Perky as an elephant who has "elephant puppies" instead.

Arthur writes up this story and shares it with Buster on the playground, but Buster only says that it's okay. Arthur is worried that it's still boring, until Buster explains that his story will be a science fiction story, which he says make the best stories. So Arthur imagines that he and D.W. live in a zero-gravity home on the Moon, where Mrs. Wood comes to collect her dog only to find that she's missing. Arthur then points out Perky floating upward to the ceiling, where she's an elephant and she once again has elephant puppies. Arthur presents this story to Brain who criticizes it for being "scientifically inaccurate". Brain insists that a story needs "good solid research", and instead proposes a rather scientific story relying entirely on facts rather than imagination. Arthur takes up Brain's advice and goes to the library to do research. Francine shows up to see how he's doing, and when Arthur reads her the story, she finds it way too technical as he uses too many scientific terms that take away from the story. Francine can't offer any helpful advice to try to make the story better, leaving Arthur frustrated once more.

Arthur gets so caught up in writing a good story that it soon becomes all he thinks about. Even as he goes to the Sugar Bowl, he is so distracted that he ends up chaining Mr. Haney to the bike rack by accident. At home, he puts all of his clean clothes in the refrigerator rather than his bedroom, much to the confusion of his parents who wonder where his mind's wandered off to. Arthur then presents a new version of his story to Binky and his friends, who say the story desperately needs a love story to it. Arthur tries this but finds that he can't do it because it's too gushy, and soon losing faith in himself that he can make a decent story for class. At the Sugar Bowl while trying to cure a case of the hiccups with several sodas, Prunella brags about how she wrote a country song for Mr. Ratburn's class last year and how it was so good he suggested she send it to a record company. Intrigued, Arthur makes his story into a musical, where he, D.W., Mrs. Wood and Perky dance to old country music dressed as cowboys singing about Arthur's elephant puppy on the Planet "Shmelefan". Arthur presents it to Grandma Thora, who loves the story but admits that it was a little confusing, which is enough to convince Arthur not to present it. Thora insists that he shouldn't be so worried what others think and that he should write it how he wants to write it, but Arthur isn't so confident in himself. Eager to impress his friends, he adds a superhero elephant based on Bionic Bunny, who all the kids love to his previous story. Having finally put together a story, which is now all the more confusing due to Arthur using the advice of all of his peers but failing to trust his own ideas, Arthur is ready to present it to class.

Arthur reads his story to his friends in class, with a scene of Mrs. Wood, D.W., "Perky", "Bionic Bunny", and Arthur all singing and jumping much louder to slightly louder music. When he finishes they don't know how to react. Binky asks if the story really happened, and Arthur admits that the story was actually based on his story about how he got Pal. Mr. Ratburn is intrigued despite Arthur's fear that it would be boring, and he insists that rather than focusing on what people want to hear he should tell the story how it means the most to him. Arthur reluctantly agrees and tells them the true story about how he got Pal. By the time he finishes, the entire class cheers for Arthur, and Mr. Ratburn awards Arthur a sticker for presenting such a great story. He then instructs Arthur to be sure it is written for class the next day for full credit. Binky asks once again if the story was a true story, and Arthur gladly declares that it was. 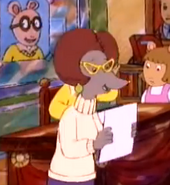 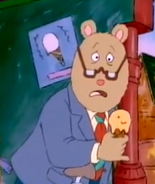 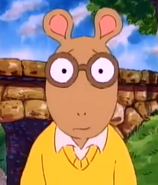 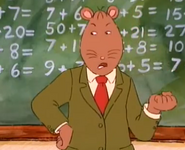 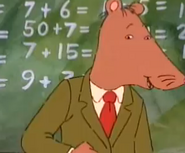 Retrieved from "https://arthur.fandom.com/wiki/Arthur_Writes_a_Story_(episode)?oldid=390863"
Community content is available under CC-BY-SA unless otherwise noted.