Start a Wiki
watch 01:51
The Loop (TV)
Do you like this video?
"Arthur and the Big Riddle" is the first half of the first episode in the fifth season of Arthur.

The episode starts at the Lakewood soccer field. A group of Arthur's friends (Binky, Muffy, Francine, George, Brain, Buster, and Alex) huddle around him.

All of them have chocolate on their faces, and are discussing how glad they are that Arthur has lost at something. They pick Arthur up and cheer for him, before carrying him around the field.

Arthur asks the viewers a riddle: "When is it better to be a loser than a winner?" The scene cuts to Arthur's living room, where Arthur is watching himself on his family's television. Arthur tells the viewers to write down the answer to his riddle, if they think they can guess it.

Arthur and the Big Riddle

Arthur and Buster are playing with action figures in Buster's house. Buster accuses Arthur of breaking his "Mackerelman" action figure, so they begin to argue. Suddenly, a game show called Riddle Quest, hosted by Alex Lebek, starts on TV and they stop arguing to watch the show. Arthur has never heard about the show, so Buster tells him about it: two kids answer riddles to earn points, before answering a 'Really Big Riddle' to determine the winner of the show; the loser receives a consolation prize of 100 boxes of 'Choco Sticks' chocolate bars ('The chocolate stick that's fun to lick!'). Buster states that the reigning champion is a girl called Charlotte Bickles, who has been appearing on the show for weeks. However, when Arthur answers three of the riddles correctly before Charlotte, including the final question, Buster begins to believe that Arthur would be a good contestant. At the end of the show, an advertisement shows, prompting viewers to send a letter to Riddle Quest Studios if they think they are good enough to be on the show.

Walking home, Arthur ridicules this idea of appearing on the show, but Buster still posts an addressed letter with the name "Arthur Read" in the mailbox to the studios.

Mr. Higgins eventually delivers Buster's letter to Riddle Quest Studios. While Mr. Alex Lebek is getting his hair cut, a mail deliverer brings a bag of letters into the room and Mr. Lebek randomly picks a letter out of it. He dismissively selects Arthur as the contestant.

Arthur receives an application letter from Riddle Quest Studios, and Buster is thrilled that Arthur is going to be on the show, along with Arthur's other friends.

D.W. brings Arthur to the Tibbles' house so he can be trained for his appearance on the show. However, the Tibbles just give him mediocre riddles, which Arthur easily guesses. However, he becomes annoyed and believes that such riddles won't be similar enough to those on Riddlequest.

Arthur complains to Buster, but he disagrees with Arthur, and encourages him to continue training. Arthur goes through several training tests with his friends: bell ringing (with Francine), tongue twisters/enunciation (with Muffy), and riddles (with Binky). At the end of the training, Arthur becomes overwhelmed and tired of riddles. He suffers a nightmare, involving a place called "Riddle Land" (a parody of Alice in Wonderland) where Charlotte forbids him from going home. He wakes up, and D.W. excitedly informs him that he will be appearing on the show that day.

Arthur and his parents arrive at the game show. Arthur is nervous, unlike Charlotte Bickles, who appears overconfident and bored backstage. Alex Lebek, the host, asks the first riddle and Arthur quickly answers it correctly (somewhat to Charlotte's surprise).

However, as the game show progresses, Charlotte catches up to Arthur until both of their scores are tied; they both answer a riddle at the same time, so none of them get the points. Since the score is tied, Arthur and Charlotte are given a 'Really Big Riddle' to determine the winner.

Arthur quickly deduces that the riddle ('I occur once in a second, twice in a week, and once in a year. What am I?') has the answer of 'The letter E'. However, he reconsiders before answering, and worries that if he answers it correctly, he will continue to appear on the show until he is elderly. Just when he is about to press his buzzer and answer the riddle, Charlotte suddenly answers with "The letter E" and wins again.

The scene skips back to the story's beginning, where Arthur is being carried by his friends across the soccer field while cheering for him. Because he lost the show, he received 100 boxes of 'Choco Sticks' as a consolation prize.

Arthur asks the viewers if they know the answer from the riddle he asked earlier in the show. He remarks "I hope not, because if you do, you're watching too many game shows!" 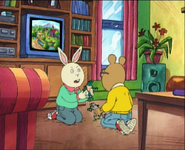 Retrieved from "https://arthur.fandom.com/wiki/Arthur_and_the_Big_Riddle?oldid=400914"
Community content is available under CC-BY-SA unless otherwise noted.