Arthur and the Big Snow is an Arthur book, an 8x8 book, part of the same series as books like Good Night, D.W. The story is about Arthur wanting to go out sledding, but not being able to go out at first because of snow being piled so high that D.W. can't be included in the fun until plowing has been done.

After a big snowfall in Elwood City that cancels school, Arthur really wants to go out sledding with his friends at the big hill, but is told that he'll have to wait as D.W. is too small to safely walk in such heavy snow. He decides he'll just have to go out and play in the yard instead and D.W. joins him. Arthur helps D.W. get dressed in her snowsuit and then two then head outside.

Arthur starts to build a snowman. D.W., however, is so bundled up that she can barely move in all the snow and demands they go back inside. Arthur gives in and brings her back in, but wants to go back outside. She, however, asks to play a game of Tower of Cows. Arthur agrees to the game and after they finish gets up to go back outside, but D.W. then asks him to read her a book. He again gives in and reads her the story Mr. Bunny while she sits on the couch with Pal and listens.

Arthur hears the snowplow come by and is excited that he can finally go out sledding. However, he then gets a phone call, which turns out to be Francine, telling him how great the sledding was and that he should have been there. As she enjoys hot chocolate and cookies with Buster, Muffy, The Brain and Binky, Arthur looks sad.

Mr. Read asks Arthur if he's ready, but Arthur tells him he already missed all the fun. Mr. Read, however, says that he thought he might like to try out the new sled, showing him a fancy sled that looks like a lot of fun. Arthur is excited and the group heads out to the hill, Arthur sliding in the new sled while the rest of his family, including Pal, slides joyfully behind him in another sled. They then all enjoy hot chocolate at home in front of the fireplace, Mrs. Read commenting that good things are sometimes worth waiting for.

The back of the book features a board game called "Downward Racers." The game is played using coins for game pieces and a coin to flip to determine how many spaces to move on each turn. 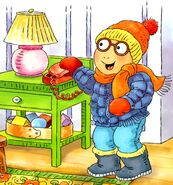 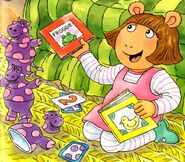 D.W. and Tower of Cows 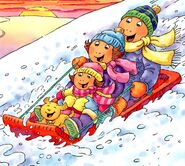 Sledding
Add a photo to this gallery 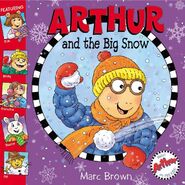 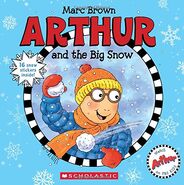 2018 edition
Add a photo to this gallery
Retrieved from "https://arthur.fandom.com/wiki/Arthur_and_the_Big_Snow?oldid=365718"
Community content is available under CC-BY-SA unless otherwise noted.