Arthur tries to write a jingle for his favorite cereal.

The episode begins with Arthur playing various tunes on the piano for the viewers. He plays "Chopsticks", "London Bridge is Falling Down", and finally, a tune he says he made up. He explains that it might have been famous, had it had a little something more to it, just before D.W. comes marching through banging a pot she's wearing on her head with kitchen utensils.

Arthur and the Crunch Cereal Contest

One morning, Arthur's family gathers for breakfast, and David is serving a new oatmeal he's made. Unfortunately, it sticks to the inside of the pot and is no good to eat, as the ingredients were mixed together badly.

Instead, Arthur chooses to eat a bowl of Crunch Cereal, and opens the box to find a small form inside. It says that whoever can come up with the best jingle for the Crunch Cereal Company will have their song aired on T.V. and win a year supply of Crunch Cereal, with twenty box tops required for each entry. Eager to win the prize, Arthur tries to think up a new jingle, while eating Crunch Cereal right out of the box all throughout the week. While Arthur and D.W. build snowmen, D.W. suggests coming up with a rhyme for the jingle, like "Crunch" and "lunch". Arthur says that D.W., who is sculpting the famous statue, "The Thinker", doesn't understand true art, as she's too young. D.W. throws a snowball at Arthur, who prepares to throw one at her.

At school, Arthur tries to come up with a good tune, but Buster calls him out to help him rescue Francine, who's been captured in a snowball fight against the 4th Graders. However, Arthur spends so much time talking about the jingle that he and Buster forget about Francine, who is now buried in snow.

Buster suggests getting a band together. Francine then emerges from the snow and threatens to pulverize them for forgetting her, but Arthur offers her a role in his band, and she quickly accepts. Later, Arthur and Buster hold auditions for possible band members, many of whom do not pass.

However, Binky gets in due to his skill with the clarinet, and Grandma Thora for her clacking spoon routine. After a while, Arthur believes they have a strong enough band, so they proceed with practicing.

At Arthur's garage, the band assembles and Arthur is conducting. Arthur wants to start "with a bang", but Francine suggests a drum roll first. Muffy and Sue Ellen suggest bringing in strings and horns, respectively. The entire band starts playing on their own accord, and Arthur gets angry and tells them to stop.

He then throws a tantrum and yells that the jingle is his and they will play his way. The band listens and Arthur continues to instruct them. Their try for a big bang goes bad when it turns out to be too big, knocking a lot of boxes onto Arthur.

David shows up saying that they are playing way too loudly, and Arthur promises to keep it down. Unfortunately, the whole band quits because Arthur has no real tune for them to play. Buster says Arthur should take a break, but Arthur angrily refuses.

Arthur tries again to create a jingle at the piano, but can't think of anything. Suddenly, he hears D.W. humming upstairs in her bedroom. She is combing Nadine's hair and when Arthur hears the tune she's singing, he realizes that it is perfect for the contest.

He creates the jingle and has Buster hear it. Buster likes it a lot and asks where Arthur got the tune. Arthur, unwilling to admit it was D.W.'s song, says he heard a tune in his head and the words just came to him.

He then goes out to submit his entry, but literally runs into D.W., who's tugging a sled. She offers Arthur an apple, feeling that he hasn't had enough fruit. She asks to hear his jingle, but Arthur just gives her a bunch of gibberish and rushes to the mailbox. At that point, he stares at the apple D.W. gave him and starts feeling guilty about stealing her song.

A few days later, Arthur wakes up and is shocked to hear the jingle playing on T.V. on the new commercial, with D.W. watching it. He tries to confess his mistake, but is interrupted by breakfast, which is once again David's new and improved oatmeal recipe.

They then get a ring from the door, and a representative of the Crunch Cereal Company rewards the family with a year supply of Crunch Cereal, much to their surprise. He then announces the winner of the contest: D.W. Read!

D.W. is shocked that she won, and later, as they pile up the cereal boxes, Arthur explains that he submitted the jingle in D.W.'s name because the song was hers, not his. He apologizes for almost stealing credit for it, but D.W. doesn't seem upset, saying she had much better songs than that one. At this point, she starts singing about how Arthur "stinks like yellow cheese". Insulted, Arthur hits her with snowballs and chases her across the lawn, and she calls for their mom. 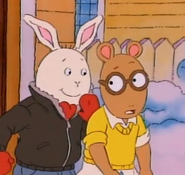 The error with Arthur's sleeve