Arthur and the Haunted Tree House

This Halloween is sure to be the spookiest ever for Arthur and his friends. While trick-or-treating, Francine meets an elderly woman with a very mysterious past, while Binky finds himself at Mr. Ratburn's amazing haunted house (that's scarier than math class!). And as for Arthur, Buster, and Ladonna? Their tree house sleepover seems to be haunted, but by what?[7][8]

It is Halloween. While various kids go trick-or-treating, Arthur and his friends are going to have a sleepover in the treehouse. Ladonna tells a spooky story to Arthur and Buster. Arthur is particularly jumpy because he believes that the treehouse is haunted.

Arthur and the Haunted Tree House

Arthur tells his friends how he talked his mother into allowing the sleepover. D.W. wanted to come too and Arthur pranked her with party snakes to prove that she was too scared. She told him that they would see who is braver.

Then Arthur went to get Halloween decorations from the attic and found a creepy looking doll. When he wanted to ask his dad whether he could use it for Halloween, it was suddenly gone. When Arthur went to the treehouse, a spooky voice called him and there was writing inside the house saying “This is MY treehouse.”

In the present, Ladonna suggests a prank by D.W., but D.W. does not know how to write. When Arthur returned to the treehouse on Halloween afternoon, the doll was suddenly sitting inside the house. He buried it by a rock outside.

Back in the present, Francine arrives. She was supposed to meet Muffy, but got held up at her apartment block. She tells the others about how she came to the Sapersteins' apartment. Inside there was a photo of a golem. Old Ethel Saperstein explained, that as a young girl she used to live in Mindelplatz near Prague. There was a talented violinist whose fingers were broken in a trolley accident. He turned bitter and created a golem which ran amok and was about to crush Mrs. Saperstein, who is ambiguous as to whether she managed to escape.

When Francine leaves the apartment, she notices that one of Mrs. Saperstein's photographs has fallen in her candy bucket. She wants to return it, but the door is opened by a man who says that he is Mrs. Saperstein's brother and that his sister disappeared as a child.

Francine tries to call Muffy, but the connection breaks because Muffy's battery is empty. Muffy and Bailey are on their way to a rich family when their tandem bicycle breaks down. Muffy suggests walking through the cemetery. Since Bailey is scared, she tells him how she and Francine dared each other to race across the cemetery the previous year. After doing it several times, they no longer feel afraid, which spoils a bit of the fun, according to Muffy. Heavy rain starts and they seek shelter under the tomb of Jacob Katzenellenbogen.

Binky joins the kids in the treehouse. He tells them how the Tough Customers wanted him to toilet-paper Mr. Ratburn’s house. He did not have the courage to do it, but an animatronic raven told him there was a treasure inside the house. Binky went into a room with the puppet of an old man in it and a thumping sound. It scared him so much that he ran away.

The others point out that that room referred to ‘The Tell-Tale Heart’ by Edgar Allan Poe. Binky realizes that he left his backpack full of toilet paper at Mr. Ratburn's house. Afraid that he will get detention for life, he hurries back. The others assure themselves that they are not afraid but when they hear a mysterious voice saying “This treehouse is mine”, they run away screaming. Except for Ladonna, who laughs at the others.

Thora hands out towels to the drenched kids who tell of the spooky voice. D.W. and Bud, who is visiting, make fun of the big kids. While Francine goes to clean her dress, the others notice that Ladonna is missing. She comes a minute later and claims that she went back to get her backpack and the doll followed her. She goes upstairs with D.W. and Bud to put on a dry sweatshirt.

In the parents’ bedroom, Ladonna, D.W. and Bud talk of how they fooled the others using a walkie-talkie so Bud could provide the spooky voice. Ladonna has dug up the doll and wants to do one last prank. They do not notice that Francine overhears them.

Francine informs Arthur and Buster of the prank and they decide to get the others back.

Muffy and Bailey hear scary noises from the tomb, but it turns out to be a cat. It scratches Bailey's clothes, but immediately likes Muffy. Since the cat's address is on its collar, Muffy agrees to return it.

Mr. Ratburn is disappointed that his decorations have scared away trick-or-treaters. While trying to remove cobwebs, he accidentally scares away the Tibbles. He notices Binky's backpack and takes it inside.

The kids watch the ‘Curse of the Moomies’ movie. D.W. wants Arthur to get her blankie from upstairs where Ladonna has planted the doll. Since Arthur knows what is going on, he gets the blankie with no trouble, in exchange for some of D.W.’s candy. D.W. and Ladonna investigate what went wrong.

Muffy and Bailey want to take the cat to its owners, the Kruegers, but the cemetery gate has been locked during the rain. They climb over the fence which ruins Bailey’s costume even more.

The Kruegers are having a party and invite Muffy and Bailey inside.

With some difficulty, Mr. Ratburn, through his puppets, persuades Binky that if he comes inside again, Mr. Ratburn will be merciful.

D.W., Bud and Ladonna look for the doll in Arthur’s room, but it has gone. Instead, they find doll-sized footprints on the floor.

Muffy meets the Mr. and Mrs. Read at the Kruegers’ party and they offer her a lift. Muffy also meets the Sapersteins, who she does not know. Mr. Saperstein is dressed as a golem and Mrs. Saperstein begins to tell Muffy the story she told Francine earlier.

Binky comes to the ‘Tell-Tale Heart’-room again and finds a book by Poe under the floorboards. In the next room he is supposed to guess the story in which Fortunato is imprisoned behind a brick wall, but he just guesses from the book's table of contents. When he finally recognizes Mr. Ratburn's voice, he apologizes for the toilet paper and accidentally breaks down Mr. Ratburn's fake brick wall. Mr. Ratburn is mollified since Binky was his only trick-or-treater and he praises Mr. Ratburns house. Mr. Ratburn returns Binky's backpack and gives him a tour.

The movie ends and Thora takes D.W. to her room. D.W. insists on checking under the bed first.

When Ladonna and Bud are about to go home, they hear a spooky voice from Ladonna's backpack. Bud is scared, but Ladonna realizes that their friends have pranked them back. She smiles.

D.W. hears a spooky voice coming from the foot of the bed and finds the doll. Her parents are just returning home bringing Muffy with them, and D.W. and Arthur tell on each other.

Muffy shows Buster and Francine pictures from the Kruegers’ party. Francine recognizes the Sapersteins and realizes that she was pranked. Arthur tells them that he has to end the sleepover because D.W. is scared.

Arthur and D.W. make truce and go to bed. A while later, D.W. comes into Arthur's bed, because she is still scared. Arthur praises her prank and she explains how she asked for help from Bud and Ladonna to get revenge for the party snakes. Ladonna gave her the doll and she hid it near the Halloween decorations. That was supposed to be all, but then Arthur decided to take the doll to the treehouse and the pranksters decided to keep pranking. They put a walkie-talkie on top of the treehouse and Bud did the spooky voices.

Arthur and D.W. assure each other that they would never let anything really scary happen to the other. They are about to go to sleep when a strange giggling scares them. It turns out to be Thora who lets Kate giggle into the walkie-talkie.

Most costumes have appeared in previous or season 21 episodes, sometimes in fantasies or dreams. In order of appearance: 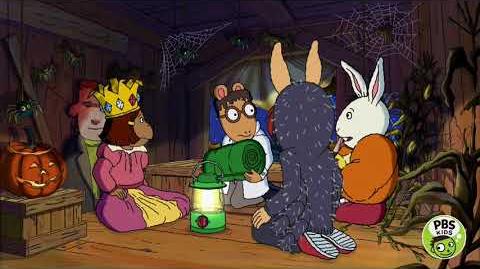 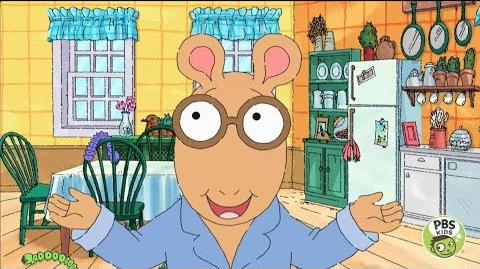 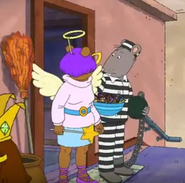