Arthur and the Real Mr. Ratburn

Arthur, Buster and Francine investigate whether their new teacher, Mr. Ratburn, is as bad as his reputation suggests.

Arthur and his friends are waiting for Mr. Haney to put up a list of what teacher they'll get in the third grade. Mr. Haney arrives, but goes back, for he forgot a tack.

Arthur tells the viewers about the three teachers for the third grade: Miss Sweetwater, who's very nice, Mrs. Fink, who's very fun, and Mr. Ratburn, who's widely considered to be the toughest teacher in the entire school. Mr. Haney finally comes and puts up the list. Francine reads the list and finds out that they're in Mr. Ratburn's class. The kids start screaming in fear and Binky passes out.

Arthur and the Real Mr. Ratburn

After the title card, the kids are still screaming. They stop and Arthur rechecks the list again, but is disappointed too see that Francine was right.

During a baseball game, Buster is dreading over Mr. Ratburn, and doesn't pay attention to anything that's going on.

The same happens to Francine while she is playing soccer. She ends up getting hit on the head with a soccer ball, yet she still dreads over Ratburn.

Arthur and his friends walk down the street, passing Mrs. Powers's Ice Cream Shop. She offers free samples of her new flavor, but they are still miserable and don't notice. Francine suggests they ask Prunella about Mr. Ratburn, since she had him as a teacher when she was in 3rd grade.

Prunella scares them silly with false stories about Ratburn: that he eats nails for breakfast (without milk), and that if anybody answers a question wrong he would send them to death row. Arthur imagines himself in death row, forced to do heavy schoolwork. Prunella also claims that Ratburn's a vampire, with dark powers. Buster imagines Ratburn as a vampire, hypnotizing the students to hate recess. Prunella wishes them good luck and leaves.

The first day of school starts, and Mr. Ratburn enters the classroom and welcomes everyone to the third grade. He promptly starts passing out a math review quiz on what they learned from last year. While working on the review, Arthur looks at Mrs. Fink and Miss Sweetwater's classes, and notices them just having plain fun. Mr. Ratburn reminds Arthur to keep working.

Class is over and everyone runs out of their classrooms except Mr. Ratburn's class, who he makes walk out in an even file. He grabs Arthur's attention and tells him to get in his proper alphabetical place.

They scream and run away to The Sugar Bowl. Francine, who's also there, notices them and asks them what they're hiding from. They explain to her about Ratburn looking for boys' heads. Francine thinks they heard incorrectly, for she thinks vampires don't need heads.

Arthur believes that Mr. Ratburn is much worse than a vampire. Just then, they notice Mr. Ratburn walking into the hardware store. They watch him closely and see him taking a box of nails, which they believe are for his breakfast. Mr. Ratburn then takes a saw.

Francine wonders what the saw's for, although the two boys figure why. Buster remembers a book about kids finding a spooky mystery and becoming detectives to figure it out. He suggests they should find out what Mr. Ratburn is up to. Arthur makes an excuse of them needing to do homework, but they ultimately decide to "face horrifying, scary danger."

A montage is shown with Arthur, Buster, and Francine spying on Mr. Ratburn around town to see if he does anything unusual. He does nothing out of the ordinary, but they do see him do many different things such as being a writer for the school newspaper and being the basketball coach.

Francine decides to stop, since they can't find anything strange about Mr. Ratburn, and goes home to do homework. Just after she leaves, Arthur and Buster see Mr. Ratburn carrying a case with him, but when he's pushing it down the stairs, an arm hangs out of the case, scaring the boys.

They follow him to the carnival, but lose track of him at the house of mirrors. They end up walking into a water gun tent, where they getup all wet when Luke and another boy shoot at their faces with water guns.

Arthur and Buster then try another tent, in which Mr. Haney is trying to have a picture taken of himself in an action pose on a horse with Mrs. MacGrady's help, but Arthur accidentally knocks over a wooden cactus prop, which hits the horse, causing Mr. Haney to start falling backwards while Mrs. MacGrady takes the picture.

Arthur and Buster leave, and Buster chooses another tent, in which they see silhouettes moving. They run in and end up being on a stage in front of kids who seem entertained. The two boys warn the kids to run from Mr. Ratburn, but they just continue laughing. A puppet of Jack from a modernized adaptation of Jack and the Beanstalk notices them and a puppet boom box (taking place of the magic harp in the original story) claims they did his lines for him. Then the boys hear Mr. Ratburn from above, controlling the Jack puppet, telling them to leave. He controls Jack and leads them out of the show. Backstage, Arthur and Buster are surprised to see a box full of puppet show props. At the show, the boom box comments that Jack would lose his head if it wasn't attached. Jack disagrees, but has his head fly off. The boom box warns Jack to hide, for the giant is coming. Jack's head bounces toward Arthur and Buster, and it cracks. Jack's headless body walks away just as the giant arrives. Backstage, Mr. Ratburn is examining the cracked head and is frustrated that they keep breaking when he does the head gag. Buster and Arthur then realize that it was puppet heads that Mr. Ratburn was looking for in the first place. Ratburn is in a hurry to get Jack prepared and tells the boys that he must stay on schedule for everything he does. Arthur compliments that he does many different things in a day and the he himself couldn't do nearly as well. Mr. Ratburn explains about organization and how many people say that he gives a large amount of homework. The boys pretend to never have heard of it. The boom box on stage asks where Jack is. Mr. Ratburn, acting as Jack, says he'll be there in a moment. He further explains to Arthur and Buster about self-discipline and how they can do their homework in time for the things they like to do. He has Jack prepared and goes back on stage. Ratburn tells Arthur and Buster to leave so he can concentrate. They begin to leave, but just then, Mr. Ratburn reminds them about their geography projects, which are due the next day, causing them to scream. 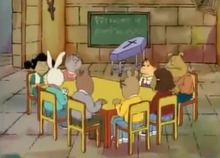