"Arthur the Unfunny" is the second half of the thirteenth episode in the second season of Arthur.

Arthur decides to learn how to make people laugh.[4]

Arthur starts the show by trying to tell a joke. He messes up the setup, and accidentally spoils the punchline, then walks off in shame.

Arthur starts writing a letter to Buster about how the Elwood City Public Library is having a fundraiser. Mrs. MacGrady is having a bake sale, Mr. Crosswire is raffling off a car, and Muffy is setting up a backyard carnival. Arthur and his friends choose to be clowns at the carnival, so they practice doing funny things. Arthur tells a joke Buster told him, but nobody finds it funny. Francine and Muffy fear that Arthur will ruin the carnival.

Arthur practices his piano, and Kate starts laughing. Arthur continues to amuse Kate by making silly faces. Meanwhile, in The Sugar Bowl, Muffy decides that Arthur can't be a clown until he can learn to be funny.

Sue Ellen comes over to Arthur's house to teach him how to juggle, but he struggles with it. Brain teaches him jokes, but Arthur doesn't understand them. Binky shows Arthur how to make funny faces, but he is unable to do that as well. Even after Muffy hires Pickles to teach Arthur, he is still not funny.

Arthur admits that he is not funny. On the day of the carnival, he is the piano player. He starts to play the piano off-key and make silly faces, like he did with Kate, causing everyone to laugh.

Pickles tells Arthur that he found his own style of humor, and congratulates him. The episode finishes with Buster reading Arthur's letter and laughing. 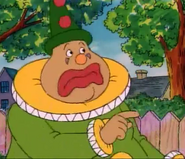