Attack of the Turbo Tibbles

"Attack of the Turbo Tibbles" is the first half of the tenth episode in the third season of Arthur.

After sneaking a peek at a new superhero TV show, the Tibble Twins decide they have superpowers and get out of control.

The episode starts off in Arthur's room. Arthur is doing his homework, but the Tibble Twins are being loud and obnoxious outside. Arthur can't concentrate.

Arthur explains to the viewers that his homework is harder whenever the Tibbles are playing with D.W. He says that Timmy Tibble is so loud that he can scream for 5 minutes straight, and Tommy Tibble is so loud that he can seem like four kids instead of one. He then tells the viewers to imagine what it would be like if the Tibble Twins had superpowers.

Arthur goes downstairs and tries to convince his mother to get the Tibble Twins and D.W. to be quiet. Mrs. Read says she'll talk to them.

She brings them into the house and attempts to get the 3 to be quiet by putting on a Mary Moo Cow video about feet. Surprisingly, they stop being so loud.

In the living room, D.W. and the Tibbles are watching the video and it unexpectedly turns off. D.W. tries to fix it by hitting buttons on the remote control, but that doesn't work. The Tibbles think they can fix it since they apparently know how to fix a VCR. D.W. goes into the kitchen to get her mother to fix it for them.

However, the TV starts to work again, but a show is on that the two claim is for babies. So they pick up the remote and turn on a different channel. A show titled Terrific Turbo-Trooper Toy T-Bot Team is on, and they suddenly become interested in since it involves a lot of action. In the show, the two main characters battle giant whales.

While the twins are watching it, D.W. and Mrs. Read come in. Mrs. Read tells them it is not for them and they try to make up excuses. She turns the show off and puts the show for toddlers back on. The Tibbles brag to D.W. about what they just watched.

The next day, D.W. walks into the preschool with Emily. They see Tommy and Timmy dressed in costumes of the main characters from Terrific Turbo Trooper Toy T-Bot Team much to D.W.'s surprise. They act out a scene from the show.

During coloring time at preschool, the Tibbles don't want to color - they want to fight crime. Outside, the class practices the alphabet and the Tibbles accuse Emily of singing the alphabet wrong.

Ms. Morgan gives them a time-out and the Tibbles see this as a secret command, so they gladly oblige. They watch the show again later and then play hide and seek, however, they cheat.

D.W. calls the Tibbles asking them if they want to ride bikes, but they're too busy watching the show.

The next day, the Tibbles come dressed as robots again. D.W. and Emily quickly go inside, but the Tibbles follow. They are acting obnoxious so D.W. goes and yells for Ms. Morgan, who gives them a time-out. Once again, they gladly oblige.

D.W. blames Arthur for everything, but Arthur gives D.W. advice: he tells her to just tell them that they are annoying and to stop acting like robots.

At the Tibbles' house, D.W. tries to talk to them, but the Tibbles see her as an enemy, and chase her and Emily. Since D.W. is the enemy, Timmy pulls a playground swing back and then lets go.

The swing hits D.W. in the face, and she begins crying loudly as her mouth starts bleeding. Emily sees what happened and runs to get Mrs. Tibble. Timmy and Tommy, realizing they've gone too far, run to hide in the garage.

Timmy then decides to stop playing the game. Tommy tells him to put back on his helmet because he's in outer space and needs it, but Timmy tells Tommy he quits and is worried about D.W. He thinks she could be dying. Tommy takes off his helmet, and asks if that could really happen. Timmy isn't sure.

Mrs. Tibble calls the boys, and Timmy tells Tommy if she finds both of them, they're going to be punished. He thinks they should have hidden against the back wall instead. Mrs. Tibble opens the garage door and finds them. They plead for forgiveness, but Mrs. Tibble is a little disappointed in them for what they did and says that they should be apologizing to D.W., not her. The twins ask if she means D.W. is still alive, and Mrs. Tibble says she is, having been taken to the emergency room at the hospital by her mom.

The twins walk to the hospital with their grandma. Inside, Jane tells D.W. she was very brave and her injury doesn't look too bad. D.W. replies "Well, it feels bad". The Tibbles come into the room and hug her, feeling bad and sorry for what they did to her. D.W. tells them that they're crying more then she did, and she's the one who ended up getting stitches on her face. The Tibbles apologize and tell her that they were just trying to have fun, and that nothing like this ever happened in the show. D.W. flatly explains to them that the show isn't real and that they should not do everything they see on TV. With that, the Tibbles finally learn their lesson.

As they leave, the Tibbles suggest watching something else, like sports, but D.W. refuses all of their suggestions, and the episode ends. 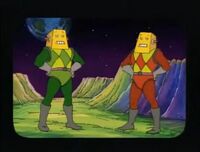 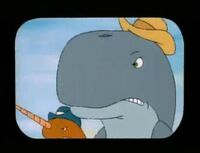 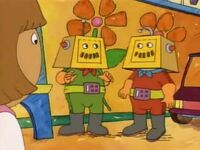 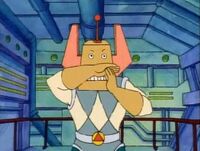 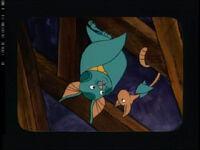 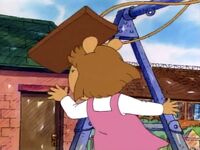