"Baby Steps" is the second half of the fourth episode in the sixteenth season of Arthur.

D.W. enlists the help of Brain to determine if her sister Kate is above average, below average, or just average-average.

Arthur pushes a giant sand-timer and turns it over. As he is doing this, he explains to the viewers how D.W. is not the most patient person in the world, giving some examples: when cookies are baking, or when the family is going on a car trip, or when she is waiting for her mom and dad to wake up before opening presents on Christmas morning. Arthur is about to give another example, but D.W. interrupts him, asking when the show will start and that she wants it to start "Now, now, now!".

After the title card, Arthur and Binky are seen watching an episode of Alfred on the TV in the Reads' living room, while Kate, Pal, and Mei Lin are wondering why Arthur and Binky find the "picture box" so amusing. Mei Lin decides to distract them with the "noise box", which is really Arthur's piano. D.W. then shows up and takes the TV remote, and Arthur and D.W. start fighting over it. Then they are interrupted by Mei Lin playing the piano, and they learn from Binky that Mei Lin can also say hello and make him burp. D.W. then begins to wonder if Kate can do those things, so she goes over to Kate to say hello, expecting her to say hello right back, but Kate squirts D.W. with her bottle instead.

That evening, D.W. tries to get Kate to wave, but she offers D.W. her toy lamb instead. D.W. goes into Arthur's room to explain Kate's problem to Arthur, who is doing his homework. Arthur says that she will learn to do stuff eventually. D.W. starts a fight with Arthur. Kate and Pal wonder why D.W. is having "fits", and they decide to find a cure.

The next day, D.W. invites Brain over to find out if Kate's intelligence is above average, below average, or just average. Brain decides to help by doing a block test, but Kate bangs the blocks instead, hoping it will "cure" D.W., but it does not work. Brain does another test where he hides a ball behind his back, but Pal finds it. Kate squirts her bottle at D.W. to snap her out her "fit".

Later, in D.W.'s room, D.W. is planning to get Kate above average. Nadine explains it will not be easy, but D.W. states that Kate needs her. In the bathroom, Kate states that D.W. needs her. Pal objects that it could take ages to find the right cure, but Kate declares that she cannot see D.W. suffer like this.

The next day, Arthur, D.W., Kate, and Pal visit Binky and Mei Lin. Binky shows Arthur and D.W. how Mei Lin can put together animal pieces on a puzzle, and after Binky shows them how Mei Lin can roar like a lion, D.W. tries to get Kate to make animal sounds too. Kate asks Mei Lin for advice on how to cure D.W.'s "fits", and Mei Lin explains to her that whenever Binky behaves oddly, she just copies him and it calms him down. Then Kate puts pig legs on the cat's body on Mei Lin's puzzle per Pal's suggestion, but D.W. tries to correct Kate. Arthur tells her to leave Kate alone, and Binky agrees with Arthur, explaining that babies can do the most amazing things when you're not watching them. Mei Lin then shows Kate how to type hello on a calculator when the others are not looking.

Back at the Reads' kitchen, Kate takes Mei Lin's advice and copies D.W., and even says D.W.'s name, to D.W.'s excitement. Then Pal shows up and Kate tells him that she cured D.W. just by copying her. Pal then states that people are the most illogical, strange, and frustrating creatures on the planet, but that they do understand how to make a top-notch hambone. Pal then goes over to his food dish and chews on a bone, finishing the episode. 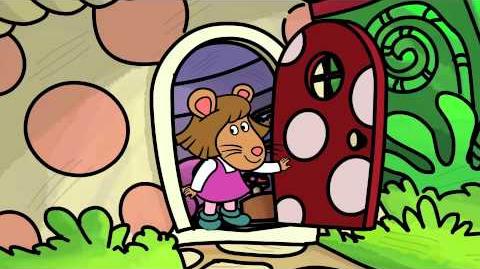 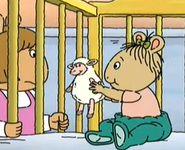