Bailey Carson Belvedere III[3] is Muffy's butler and chauffeur. He’s very good at art and built many sculptures for Muffy's art show.[4] He does everything he's told, even doing a wheelie with the limo.[5] He has worked for the Crosswire family for ten years and has a bedroom in their mansion.[6]

Bailey often gives advice to Muffy when she needs it. He admitted that he actually enjoys doing his job, despite it involving a lot of hard work for him. He also admits that it is never dull for him.[7] In his years at elementary school he was picked on, one of the bullies being a kid (now adult) named Chester.[8] He also calls Muffy, "Miss. Muffy."

Bailey is an anthropomorphic beige dog. He wears brown shoes, gray trousers, a white shirt with a red necktie under a dark gray suit jacket. 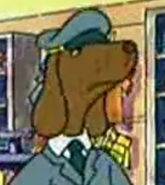 Bailey in "The Play's the Thing"

The full image gallery for Bailey may be viewed at Bailey/Gallery.