watch 03:27
Wiki Targeted (Entertainment)
Do you like this video?
Play Sound

Bear Lake is a lake in Elwood City.

The lake features a beach, and is surrounded by mountains. There are usually a lot of people on the beach, and dogs are allowed on the beach; as evidenced in "D.W. All Wet", wherein a dog is seen at the lake. A raft floats in the water of the lake, which is used for jumping.

D.W. was afraid to enter the lake because she thought that there would be octopuses in the water. Arthur and Buster used this fear in the act of teasing her, with a malodorous trick featuring Buster's bathing cap used as an ersatz octopus.

Across from Bear Lake there is an island, known as "Button Island". It is also close to World's End Park.

Raft in the lake 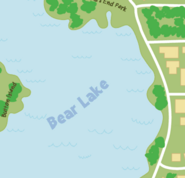 Alternate map of the area

In relation to Elwood City
Add a photo to this gallery
Retrieved from "https://arthur.fandom.com/wiki/Bear_Lake?oldid=390393"
Community content is available under CC-BY-SA unless otherwise noted.