"Best Enemies" is the second half of the eighth episode in the fifteenth season of Arthur.

D.W.'s parents think she will become best of friends with a 4-year-old girl named W.D., but it turns out they have nothing in common.

Arthur and Buster are playing catch in the park. Arthur talks to the viewers about how some friends like different things. When the ball goes over the fence, Arthur says that he hates climbing fences, but Buster says he loves climbing fences. He climbs over, grabs the ball and throws it back to Arthur. At The Sugar Bowl, Arthur says that he hates pickles, but Buster loves them, even dipping one into his milk, much to Arthur's disgust. The food then comes to life. One burger loves being covered in mustard while the other one doesn't. The ketchup says that he hates when sandwiches talk during TV shows. The mustard and ketchup spray at each other and laugh. Arthur finishes up by saying how despite their differences, they are still best friends.

One day at the Reads' house, Jane is focused on making the house perfect as they prepare for a visit from her new tax clients, the Merkles. The Merkles have a little girl D.W.'s age, and she's excited to play with her. The doorbell rings, and D.W. rushes to answer the door. Herman and Ursa Merkle introduce themselves and their daughter, W.D. D.W. is surprised that W.D.'s initials are hers switched around, but Arthur interrupts and says D.W.'s full name, much to her dismay. Ursa reveals that W.D. stands for Wilhelmina Dagmar, much to W.D.'s annoyance.

D.W. leads W.D. to her room to show W.D. her toys and suggests they play the board game Over the Rainbow Treasure Hunt. However, W.D. isn't interested in unicorns and would rather play with race cars, being disappointed when D.W. doesn't have any. While Ursa and Jane hang out in the living room, they hear the two girls arguing. Arthur goes upstairs to check on them and finds D.W. upset that W.D. said unicorns aren't real. He explains to W.D. that it's a touchy subject for D.W. and suggests that the girls come downstairs, because dinner is almost ready. W.D. weakly apologizes for what she had said. D.W. replies that she's lucky there were no unicorns in the room to hear her, to which W.D. scowls.

At dinner, W.D. excitedly shows off a race car track she bought, but D.W. is bored. The two girls wonder why grown-ups think that just because they are the same age, they're going to have lots in common. Later, W.D. and her family prepare to leave. Herman and Ursa have become friends with David and Jane, with Herman inviting the Reads (except Arthur) to stay with them at their house up north next weekend, much to D.W. and W.D.'s horror.

Several days later during the car ride to the house, D.W. is worried about getting along with W.D.. Nadine comes along in her rocket car and tells D.W. a plan to cut the weekend short. Meanwhile, at the Merkles' house, W.D.'s imaginary friend, an elephant named Maxine, also gives her advice and the two of them laugh. Soon, the Reads arrive, and Ursa tells Jane that the girls will have to share a room. W.D. sarcastically says, "Why would we mind?"

While the Reads and the Merkles go on a nature hike, D.W. and W.D. talk about their plans. The girls are pleasantly surprised to learn both have imaginary friends. Their mothers are glad to see them hanging out together.

Later, in W.D.'s bedroom, the two plan to dump out the toy box and make a mess. Herman and David hear the girls arguing over sharing the toys, and they run upstairs to see them bickering about who dumped out the box. Herman suggests that D.W. and W.D. should go out on the porch to paint, because they need a creative activity.

D.W. and W.D. briefly enjoy painting together before enacting the second part of their plan. They start a paint fight, with all the parents hearing the splashing. They rush outside to see D.W. and W.D. covered in paint. Each girl points at each other and says, "She started it!"

After cleaning up, D.W. and W.D. are taken canoeing by their fathers to get some fresh air. The two girls argue about sitting in the front of the canoe and get into an arm fight, which causes the canoe to capsize. D.W. and W.D. then splash each other.

As planned, the Reads decide to leave early. Jane and Ursa realize that even though their girls are the same age, they don't have to get along if they have nothing in common. W.D. and D.W. admit that they actually had fun while pretending to fight. As the Reads drive away, D.W. suddenly changes her mind and convinces her parents to return to the house by claiming she left her Troll doll behind. D.W. assures them that there must be something she and W.D. have in common before winking at the viewers. The episode then finishes. 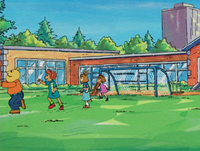 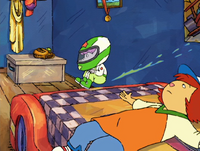 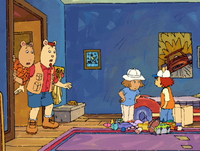