"Big Brother Binky" is the tenth episode in the eleventh season of Arthur. It is a two-part episode.

On a winter day in Tibet, Binky trains with Arthur about the activity of the big brother. Soon, he tests his skills on D.W., but bossy D.W. has her own rules so Arthur and Binky run off.

One day at dinner, Binky's parents have a plan to adopt a baby. Binky goes into the living room to watch a wrestling match. When the show finishes, Mr. Barnes comes in the room and tells Binky that he's going to be an older brother with a baby sister from China. When Binky goes to sleep he wonders if the baby is going by herself. Mrs. Barnes says that they will be going to China to pick her up. Binky is even more excited now. He dreams of him and his sister in a wrestling match and beating the opponent.

Binky wakes up and looks in the mirror saying, "Well, big brother you'd better get ready". He then packs up, but his mom says it could be a year before they go. Binky doesn't want to wait, so his mom gives him a job to make sure they get all their paperwork in on time. As a reward of that, they all go out for Chinese food. Binky hopes that the wait won't be long, but they still have to make the baby's room. Binky wonders if there will be a new room or if he gets a bigger one, but it turns out that his parents want to make the baby sleep in his old game room, which disappoints Binky. When going through the closet, Mrs. Barnes finds an old piece of fabric to use for the Baijabei, the new quilt for Binky's sister. Binky wonders if he had one to, but Mrs. Barnes says that the quilt is part of a tradition that she didn't know about when Binky was a baby. Day after day, his friends keep giving him patches for the quilt. Soon the new room is all built. Mrs Barnes comes in the room with a photo of Mei Lin: Binky's new sister. Arthur calls Mrs Read and D.W. to see the picture. When Arthur asks when the baby can come home, Binky's mom remembers something: Travel shots. Binky hopes the baby will be worth it. While packing up the things the baby needs, they run out of room and the suitcase explodes. Binky wants to bring a butterfly net with him, but there isn't any room. Half of what the baby needs have to go in his suitcase. After packing, Binky goes to bed cranky, because he feels that he has to share too much. He has a nightmare about being small compared to the new baby. When Binky wakes up, his mom and dad are already there and ready to go to China. On the flight, a child kicks the back of Binky's seat and he turns around and shouts at her. Mrs. Barnes scolds Binky, which makes him think his mom no longer cares about him, but Mrs Barnes says she will always love him as much as she always had. Mrs. Barnes has a surprise: A quilt just for Binky. Binky is excited about meeting Mei Lin and wonders if Mei Lin feels the same.

Part Two: The plane is about to be landing in China and Binky is excited to meet Mei Lin and wants to know if she will be at the airport. It will be at least be a few days before picking her up. Binky complains about more waiting, but Mr. Barnes tells him there will be sight seeing to distract them. When the day comes to pick up Mei Lin, Binky worries about getting the wrong baby. Mr. Barnes and Mrs. Barnes assure him that it that will not happen since the people have done this lots of times. Finally, Binky and his parents meet Mei Lin. When Mei Lin begins to cry, Binky quickly tries to stop Mei from crying, after realizing to discover that he has a special talent in stopping Mei Lin from crying. It works for a while, but doesn't work anymore when Mei-Lin meets Arthur, who eventually stops her crying. One night, Binky and his family are at a Chinese restaurant when Arthur and his family show up and Binky starts to worry that Mei-Lin would rather have Arthur for her brother. Then, Mei-Lin throws her food at Binky. Binky blows raspberries at her, with Mei-Lin doing the same thing. 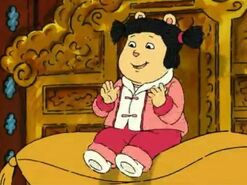 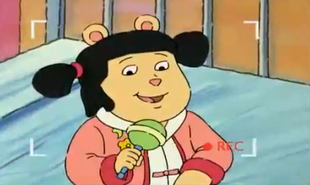 Retrieved from "https://arthur.fandom.com/wiki/Big_Brother_Binky?oldid=393477"
Community content is available under CC-BY-SA unless otherwise noted.