"Binky Goes Nuts" is the first half of the tenth episode in the ninth season of Arthur.

When Binky discovers of being allergic to peanuts, he has so many questions: Will he be forced to live without Chinese food? Will he ever again be able to eat with his friends? And most importantly, will his Mom ever calm down? Binky learns that the best way not to go nuts is to be well informed, and to understand his allergy.[2]

At the beginning of the episode, Muffy is sun-tanning on the grass next to the school, talking about getting stuff for the summer. Then the scene goes to Binky and Molly, who are blowing out spitballs again; a mysterious butterfly swoops down on Binky's arm. Shortly after, Molly sees it and wants to hit it, but Binky stops her and says that it's one thing to hit kids with spitballs. He then adds that butterflies are “harmless, beautiful creatures that—”, but stops at seeing red bumps on his arm. Molly suggests going to the nurse to check it out. Brain and Buster hear this, and Buster remarks that he didn't know butterflies could bite; Brain disagrees, saying they can't.

While at the hospital, Dr. Kingsbury says to Binky that the butterfly didn't cause the allergic reaction and adds that Binky's also not allergic to pollen or pet dander, much to Binky's relief. However, Dr. Kingsbury notes that Binky's blood test revealed that he's allergic to peanuts, which worries Mrs. Barnes. Binky doesn't think it's a big deal, pointing out to his mother that he doesn't even like peanuts. But both Mrs. Barnes and Dr. Kingsbury state that food allergies can be quite serious and that if Binky were to ever ingest something that had peanuts or peanut products, he could suffer from anaphylaxis. When it becomes apparent that Binky doesn't know what anaphylaxis is, his mother and Dr. Kingsbury state that it's an acute reaction that some people suffer from if they're allergic to certain types of foods, and that it's much more dangerous than something as simple as a rash, as anaphylaxis can cause difficulty in swallowing or even breathing. Before Binky and his mother leave, the doctor gives them some special brochures with information on peanut allergies.

Later, while grocery shopping, Mrs. Barnes says to Binky that due to his newfound allergy, they have to be fully careful about the food they buy and eat, as there are lots of foods that can have peanuts or peanut products in them (such as a can of chili that Mrs. Barnes was looking at being revealed to have peanut oil as one of its ingredients). At dinner, Binky's mother is revealed to have made chicken cutlets—Binky's surprised by this and points out to his parents that they've always gotten Chinese food on Friday nights. Mrs. Barnes says that a lot of Chinese food is made with all types of peanut products, and both she and Binky's father note that it's better to be safe than sorry. Binky's kind of upset about this, but eats the cutlet anyway (which he admits is very good). However, Binky gets mad when his parents suggest he sit at a different table from his friends in the case they have food with peanuts or peanut products in them.

That night, Binky has a bad dream that he is denied the opportunity to select anything (even though NOT containing any peanuts or peanut products) that Mrs. MacGrady is serving in the cafeteria that has even the slightest association with peanuts (real or imaginary) and even the word,"peanut" itself (e.g., the cook who prepared the lasagna once stepped on a peanut, Peanut is the middle name of the guy who flipped the burgers, the eggs used in the lemon meringue pie were hatched by a chicken who once dreamt of a dancing peanut in a bowler hat). The dream continues, with Mrs. MacGrady putting him at a table just for kids with allergies and showing him the other kids there: Adam, who has to wear a spacesuit due to his allergy to Formica, and Ron and Don, who're allergic to their hands and utensils, so they have to eat from a wooden trough. She then serves Binky some Brussels sprouts, saying he will be eating them every day for the rest of his life. Binky, who doesn't like Brussels sprouts, screams “No!”, and the dream ends. The next day, Binky's mother gives him his very own cell phone in case of emergencies.

While at a candy store, Binky's trying to make up his mind about what to buy while assuring his mother (over the phone) that he'll make sure not to get anything that has peanuts in it. Jenna overhears Binky talking to his mother and suggests that he buy Gummi Slugs, which don't have any peanuts or peanut products. Binky says that he doesn't like Gummi Slugs and then questions how Jenna could've known about his peanut allergy. Jenna says that Binky's parents e-mailed the school about it, which Binky finds embarrassing. Jenna assures him that it's okay, stating that her family had done the same thing when Jenna was discovered to be allergic to dairy. Binky feels sorry for Jenna upon hearing this, pointing out that there's dairy in pretty much everything, which Jenna notes is true. However, Jenna says that she got used to it after a while, especially when she and her family became more informed of the allergy and were able to find dairy-alternatives that Jenna could eat, such as a type of ice cream made from rice milk. Jenna offers to help Binky become more informed on his peanut allergy by taking him to the library, which Binky agrees to after buying a bag of cashews.

While at the library, Binky and Jenna are looking at some books when he feels his throat tickle and he and Jenna notice a weird rash on his arm, Binky calls his mother, who takes him to the hospital to have a special shot. After Binky's feeling better, he's confused as to why that happened, as he's not even allergic to cashews. Mrs. Barnes notes that the cashews he ate were probably produced in a plant that also handles peanut products.

That night, Binky has a dream that he is rescued from Dr Legume by Bionic Bunny, who tells him he knows how he feels because he's allergic to salt. The next morning, Binky (finally taking his allergy more seriously) goes through all the food to check which ones have peanut products in them and which don't. While this is happening, Mrs. Barnes finally comes into the kitchen and sees what her son is doing. Binky says to his mother that he found some food with peanuts/peanut products in them that they missed, and Mrs. Barnes is glad that her son's finally putting more effort into understanding his allergy and taking it more seriously.

While at school, Binky's sitting with his friends, who are now informed of Binky's allergy to peanuts. They're very understanding of it and are doing everything they can to help him, with Molly even acting as a kind of bouncer to kids who come up to their table to make sure that they don't have any food with peanuts or peanut products in them. Binky's mother calls him on the phone to make sure he's okay and it turns out that she's really standing outside the school cafeteria. When she looks at Binky eating a sandwich, she gets worried that it has peanut butter in it, but Binky reminds that it's a cream cheese-and-jelly sandwich that she herself made for him. This calms down Mrs. Barnes and she and her son share a laugh after he tells her how good the sandwich is.

Later, on a Friday, Binky takes his parents to Chinese restaurant called the Golden Panda. Binky says to his parents that the place specializes in peanut/nut-free Chinese food, so people like him can still enjoy Chinese food without having to worry about their allergies. Binky asks his parents if they can eat here on Friday nights, which they agree to, much to their son's delight. 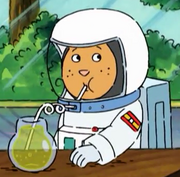