"Bitzi's Beau" is the second half of the eighth episode in the fifth season of Arthur.

Buster fears the worst when it's time to meet his mother's new boyfriend.

School has just let out for the day and all of the Lakewood Elementary students are leaving. Buster meets up with his mom and they greet each other the way only they do (a handshake) before leaving. Arthur begins to talk about how Buster and his mom are great friends and do everything together, such as seeing loud movies, do chores and make it fun, and sometimes they'll also just eat together. But he then states that unfortunately, it might change when Buster meets his mom's new boyfriend.

Arthur and Buster are watching Bionic Bunny when Bionic Bunny hears a little girl crying for help. She has a splinter and he goes to remove it when he suddenly sees green liquid leak from her eyes. He claims she isn't an alien and the "little girl" transforms into an alien. Just as she prepares to attack, Buster suddenly gets a call and his mom takes the phone. The following day, Arthur angrily tells him he waited twenty minutes for Buster to return, but he never did. Buster points out that his mom has been acting weird, like smiling a lot.

At school the next day, Muffy claims that Buster's mom has a boyfriend. Buster denies this until Muffy points out many obvious signs and Arthur claims that maybe she really does have a boyfriend. In class, suddenly Mr. Ratburn is giving the kids back their assignments and after seeing the grade he got, Buster is sure that Mr. Ratburn must be his mom's new boyfriend.

Buster then proceeds to have a fantasy about his mom, himself, and Mr. Ratburn at dinner and does not like how it goes down. He then begins to worry, imagining them marrying each other at some Vegas-like wedding chapel, and then eventually they'll end up having children, whom Buster images to be incredibly troublesome.

Soon, Arthur snaps him out of it as Mr. Ratburn comes by and Buster begs him to say something about his mom, like she's ugly, or crazy. And so, Arthur claims that his mom has a lizard she feeds rats to. But Mr. Ratburn only likes this, as he likes lizards. At home, Buster begs his mom not to marry Mr. Ratburn, but Bitzi has no clue what he's talking about. She tells him that she isn't dating Mr. Ratburn, and on Friday she wishes to bring "Harry" over for dinner. Buster has no clue who Harry is, though.

Walking with Arthur, Buster begins to grow suspicious that Harry seems too perfect and might be an alien, which he begins to fantasize about until he once again snaps out of it moments later. Arthur tells him that he isn't an alien, and he doesn't need proof to show that he isn't. Buster still wants to make sure though and puts batteries into his "alien checker", when suddenly the doorbell rings. Bitzi asks Buster to get it and he opens the door to see Harry and is initially scared of him, but he then makes a joke and Buster lets him in. They have a decent dinner, and Harry even makes him laugh. They have a very nice evening and he then offers them some dessert. They then go to get plates and Buster checks said dessert, to make sure it's not some trick and realizes he actually has a lot in common with Harry.

Bitzi then tells Buster she'll tuck him in soon as he goes to bed. Even if he is an alien, Buster thinks he's a nice one. Bitzi then tells Buster if he didn't like Harry then they won't have to see him again. This makes Buster confess that he's a little worried that she'll forget all about their special things together if she gets too involved in the relationship. But she confirms that would never happen and they go to a hockey game shortly afterwards, where Mr. Ratburn states feeding rats to lizards isn't too healthy for them before he takes off. Bitzi asks what that was about when both Harry and Buster pull out their alien detectors and claim Mr. Ratburn to be an alien as the episode ends. 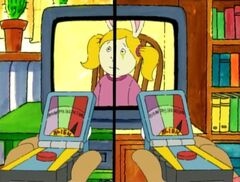 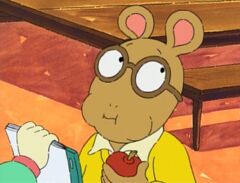 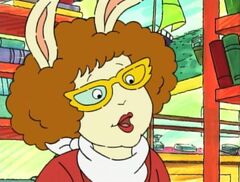