"Bitzi's Break-up" is the second half of the first episode in the eighth season of Arthur.

Buster is laying in his bed and throwing an autographed baseball into his glove. His mom comes in to talk to him, but he pretends to be sleeping. When she leaves his room, he wakes up and continues throwing his baseball into his glove. The next day, Buster tries to rush off to school without breakfast, but is stopped by his mother and is told to have breakfast while she talks to him about something. At first, Buster thinks that it is because Harry is moving away because he has chosen to get a new job, requiring him to move out of Elwood City. He is happy when Bitzi tells him that Harry isn't going anywhere, but becomes surprised when he finds out that his mom's news is that she and Harry are breaking up. Later in the treehouse, Buster tells Arthur that he is upset about Harry and his mom breaking up because he enjoyed going to Elwood City Grebes baseball games with Harry. A flashback occurs where Harry and Buster are at a game: a Grebe throws a baseball, and lands in Harry's drink, but Harry and Buster are happy to get it. Buster mentions that he can't go with his mom because she doesn't like baseball. When Arthur suggests that Buster's mom might get a new boyfriend, Buster imagines that his mom gets a boyfriend named Martin Spivak who works for an insurance company, and is very boring and doesn't want to spend time with him. Then Buster proclaims that his mom and Harry can't break up and goes to Muffy for advice. Muffy assumes that Buster has come to her about winning Sue Ellen, but he insists that it is about his mom. Muffy gives him a love magazine to help him get Bitzi and Harry back together.

First, at the Elwood City Times, Buster drops off a secret invitation at Harry's office. Despite Buster using too much of his mom's perfume, and his misspelling of "dinner" as "diner", Harry is convinced that Buster's mom is inviting him to dinner at their apartment. Buster then looks for some flowers: he is about to pick a stranger's flowers off his lawn until he is caught, not realizing that the stranger is on his front porch, and instead goes to the park to get some. He tries to order a meal from a restaurant, but finds it to be too expensive and buys a $0.99 pizza instead. He takes everything home and sets up the dinner with love music from Tyrone Bellows. Bitzi arrives home, surprised to see Buster's setup, and even more surprised when Harry comes over. As Bitzi and Harry bicker, Harry mentions Bitzi's invitation that she never wrote. Buster tells them they shouldn't be fighting and that they should be making up, but his mom tells him that she doesn't want to Harry to take him back because she broke up with him. That night, she explains to Buster that the reason she broke up with Harry was because she is too busy for a relationship. Still disappointed, Buster goes to sleep. 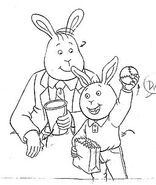 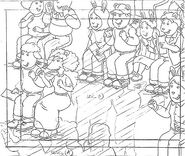 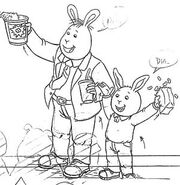 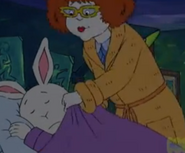 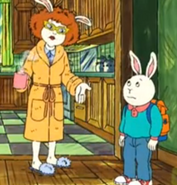 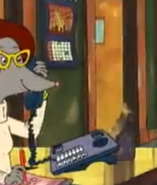 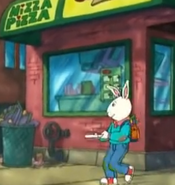