The blankie is a blanket used by D.W. in the Arthur series. It has a light pink surface with a darker pink border, along with a single patch on its surface. D.W. had the blankie since birth and was very attached to it. She had a special hiding spot for it in her room and often wore it as a cape. She found it better than a nightlight for helping her to get to sleep and had a lot of trouble sleeping without it.

D.W.'s blankie appears in several episodes. It has magical properties in the story D.W. makes up about "B.W.". In another episode she loses the blankie, and eventually finds that her mom washed it. In "D.W.'s Furry Freak-out", Fur Elise sleeps on the blankie.

It was also the subject of the book D.W.'s Lost Blankie, an adaptation of the "D.W.'s Blankie" television story. The book provides background information not seen in the television story, including depicting D.W. as a baby wrapped in the blankie. The illustration of the blankie is much more detailed in the book. It is pink with red dots all over it, with purple and yellow-colored patches and a dark pink border. In Hic or Treat D.W said it hit the dust a long time ago.

D.W.'s blankie is mentioned again in "Hic or Treat" and "Arthur and the Haunted Tree House". 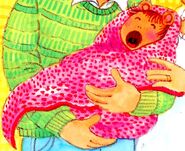 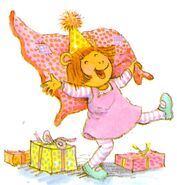 D.W. on her birthday with blankie

D.W. clutching her blankie in the cover art of the "D.W.'s Blankie" video release

D.W. is wearing her blankie as a superhero cape in Arthur's fantasy in "D.W. the Copycat".

Title card of "D.W.'s Blankie," D.W. wearing the blankie as a superhero cape.
Community content is available under CC-BY-SA unless otherwise noted.
Advertisement