"Blockheads" is the second half of the third episode in the sixteenth season of Arthur.

D.W. and Emily are pressured when they get stuck with the blocks at playtime.[1]

In a big city with lots of skyscrapers, Arthur shows the viewers his dream house. It has a robotic butler named Wilson, a hammock, a bone-shaped pool (inspired by Pal), and the latest technology, including a very expensive television. Suddenly, Arthur gets a video call from Buster on the TV. Buster says that Arthur should come see his dream house, so he transports Arthur there through an intergalactic wormhole. Buster's dream house looks a lot like his normal one, but it is all made of cheese. He gets distracted by the various types of cheese while Arthur introduces a story of "a girl who actually built her dream house, or, at least she tried to."

After the title card, D.W. and Emily are at preschool, disappointed that the only activity left during free choice is the building blocks. They think that blocks are boring toys, but they plan to make a barn because there's nothing else to do. As time goes on, the barn turns into a big palace that they actually enjoy building. The end of the preschool day comes quickly, and Mrs. Read comes to pick up D.W. The girls don't want to leave because the palace is not yet finished, but Ms. Morgan promises to leave it up for another day.

That night, D.W. has a dream that the palace is life sized. It still isn't finished, but she walks through the completed sections, admiring the giant fountain, the unicorn stables, the Mary Moo Cow golf course, and the museum of Arthur's mistakes. Emily is also there. The two continue building new parts of the palace until D.W. wakes up, smiling at some new ideas.

D.W. gets out of bed much earlier than normal. She wants to get back to preschool quickly to continue building with the blocks again, so she gets herself ready and even makes her mom a breakfast.

At preschool, D.W. and Emily continue with the additions to their wooden block palace. The Tibbles start knocking its walls over, so the girls hand over their snacks to keep them away. Miss Morgan has the class go outside later that day, but D.W. and Emily don't want to stop building. They say they have to go to the restroom so that they can continue on the palace. But soon they run out of blocks so they come up with another plan. Emily fakes an injury so D.W. can sneak into the hallway closet, where more blocks are kept for the 3-year olds. With the additional blocks, the palace continues to grow in size. Ms. Morgan thinks that D.W. and Emily should let the other children play with the blocks. She asks them to take the palace down, but they convince her to let it stay for one more day.

The next day, the Tibbles demand more snacks, so D.W. and Emily give up their raisins for the safety of the palace. But now some of the other students are playing with the blocks; building things that Emily and D.W. don't want, using the wrong block color, and accidentally knocking sections over.

D.W. and Emily become obsessed with their palace. They don't want to do anything but make it bigger. Their arms begin to feel sore from the constant stacking, and D.W. even skips snacktime to continue building. At nap time, D.W. dreams that the life-sized palace falls down uncompleted. After waking up, D.W. and Emily continue building until a visitor, Captain Kamble, brings in a koala with him for the class to pet, and D.W. and Emily are torn between building more or stopping to pet the koala. Suddenly, a loose block knocks over the palace. D.W. and Emily are shocked at first, but feel relieved when they realize that their obsession can stop. They walk over to the koala and Ms. Morgan reminds them to pick up their block mess afterwards. They shrug, smile, and pet the koala, ending the episode. 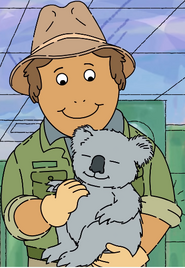 Captain Kamble
Add a photo to this gallery
Show/Hide gallery

Retrieved from "https://arthur.fandom.com/wiki/Blockheads?oldid=392380"
Community content is available under CC-BY-SA unless otherwise noted.