Bo Baxter is the father of Buster Baxter and ex-husband of Bitzi. He is an airplane pilot. In "Arthur's Faraway Friend," Buster went traveling with him all around the world up until the first episode of season three, "Buster's Back." Currently he is the private pilot of a band that is on tour, Los Viajeros. He flies them around North America and a variety of other places. Although he and Bitzi are divorced in the series, they are married in the books, but only Bitzi has appeared in the book Arthur's First Sleepover (book). Bo is mentioned in Arthur's New Puppy (book) and Arthur's Christmas.

Bo Baxter was formerly only seen wearing a pilot uniform that consists of a teal hat, a white long-sleeved top, teal pants with a belt buckle, and gray loafers. In his early appearances, he was originally shown as an older version of his son Buster and his face was generally hidden from view. He only talked once in the series at the end of the episode Arthur's Faraway Friend, however, he did show up in pictures.

Bo's appearance in seasons 2 to 5 of Arthur

Bo's appearance in season 8 of Arthur

Bo's appearance in Postcards from Buster; and in seasons 9, 14, and 19 of Arthur

In the pilot episode, "Postcards from Buster," he is redesigned to have glasses, long hair, slightly tanner skin/fur, a cleft chin, and a less round face.

In the spin-off series, his appearance changed drastically again with a very short brown buzz-cut and a different pair of glasses. It is unknown how long Buster spent traveling around with his father, or if Buster has traveled or will travel with his father again in the future.

Flashback without the beard 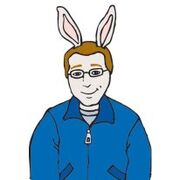 Bo doing his job as a pilot

Buster and Bo Baxter on Airplane

Bo with his son Buster and the band Los Viajeros