"Bud's Knotty Problem" is the first half of the fourth episode in the twentieth season of Arthur.

Bud becomes attracted to his new pair of boots, but must learn how to tie his shoes.

In the introduction, Bud and D.W. claim that nothing is impossible for them and prepare to fight the world's smelliest monster, which turns out to be a spilled trash bag.

One morning, Bud and Ladonna struggle for the funnies. Ladonna wins and Bud only gets the ads, where he sees an advertisement for boots. He imagines what fun he could have with them, but they have laces and Bud claims to be allergic to knots. His mom promises to buy the boots if he learns to tie his laces.

At a tea party at Emily’s house, D.W. is shocked that Bud does not know how to tie his shoes. Emily shows Bud and D.W. a video of a mime tying his shoes, but since he is only miming, the video is not helpful and neither D.W. nor Bud see the point of a mime show. D.W. promises to teach Bud to tie his shoes.

D.W. lets Bud practice with a pair of Mr. Read's shoes. D.W. uses the “bunny goes around the tree” metaphor which only confuses Bud. He gives up.

At night, Bud asks Rapty if there is anything he cannot do. Rapty cannot clap. In Bud's imagination, a tiny Emily and D.W. appear and make fun of him because of the things he cannot do. Bud decides to give shoelaces another try and gets a pair of laced shoes out of his closet.

The next morning, Ladonna finds Bud face-down on the carpet because he tied one of his shoes to the other. She explains how to tie a shoe without bunnies and makes Bud try again and again.

A few days later, Bud ties his shoes in the morning and gets it right on the first try.

Mrs. Compson takes Bud to buy the new boots, but they are heavy and itchy. Bud instead gets shoelaces with dinosaurs on them. At home, Rapty shows him shoelaces with Buds on them. Bud gets back into his old slip-ons, because they are his favorites. At least until he replaces them with roller skates. 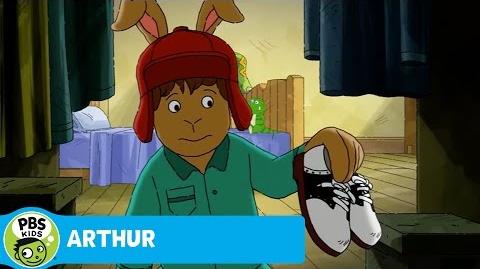 “There’s an imaginary door right to your left, Martin!”

“If that’s how you learn how to tie your laces, I’m in big trouble.”

“I knew it! You’re good at everything.”

Trying on the new boots