Buster and Arthur make a long-awaited field trip to a dinosaur excavation site and museum. On his own, Buster discovers a fossilized dinosaur footprint and takes it home. Despite it being against museum rules, Buster doesn't want to relinquish his find.

Arthur talks to the viewers about how people can get carried away with things sometimes, like when D.W. played the Hippo Hunt video game for four days straight, and when Francine tried to score a hundred baskets in basketball in a row (which she probably failed at). Arthur then says "Well, now Buster's gone crazy for dinosaurs!"

In Mr. Ratburn's class, Mr. Ratburn announces that they will be taking a field trip to Rainbow Rock State Park, where they will find different kinds of fossils. Buster is so excited that he knocks over his chair.

The class arrives at Rainbow Rock State Park. Buster and Arthur arrive with Arthur carrying a heavy load of supplies. The whole class begins playing around until Mr. Ratburn alerts everyone to follow him.

They enter the exhibition area and meet up with Ranger Ruth, who will be their fossil-hunting guide. She asks the class what a fossil is and Buster answers in a very scientific manner, much to everyone's surprise.

The show begins, and Ranger Ruth explains about life many years ago: how there were different plants, bugs and of course, dinosaurs. She further explains how the animals would die out. During this scene, the back person of the dinosaur costume accidentally falls backwards and runs away. Mr. Ratburn has the laughing class quiet down.

Ruth continues and explains how certain parts of the bodies such as bones would last during the rotting time, and how water covered the land and eventually became rock and dirt, thus covering the remains, turning them into fossils.

After the show, the class heads out to hunt for fossils. On the way, Ruth talks to the children about how certain layers in the cliff date how old a certain fossil is depending on where it's found. Muffy asks how they are going to search in the cliffs, but Ruth says that they will be searching in the water.

In excitement, Francine rushes into the water and begins searching. Later that day, all the kids are still searching, with Buster and Arthur not having any luck. Mr. Ratburn notifies them that they will be leaving soon.

Buster, in determination, wants to keep looking until they leave. Arthur protests at this, for the other students are having soda for a lunch break. He accidentally picks up a rock, which turns out to be a fossil. Buster notices, and goes through a daze.

Nervously, Arthur drops the fossil into the water, but Buster jumps after it and begins digging through the rocks rapidly until he finds it. Arthur thinks it's a leaf fossil, but Buster rebukes this and sees that it's a footprint.

When the kids are gathered together, Brain shows Ruth a shell fossil and she places it into a sack. Buster notices this and is surprised to see that they don't get to keep their findings. Ruth explains to him that they take the fossils to the museum.

Buster is upset at this and hides the footprint in his hat. He also pretends that he and Arthur haven't found any fossils. As they leave, Arthur tells Buster he should give his fossil up, but Buster doesn't yield and still wants to keep it.

Ruth meets up with them, congratulates Buster for being an excellent paleontologist and pats him on the head, where the fossil is. Because they are so nervous, they imagine Ruth as a dinosaur on the way out. On the way home on the bus, Arthur asks if they could tell someone about the fossil, but Buster denies this, for he thinks it's too dangerous.

When Buster gets home, he wraps the fossil in tinfoil, and stuffs it in a bag in a box of marbles to hide in his closet. At dinner, Buster's mom asks him if he found any fossils on the field trip, and he nervously says no.

The next day at school, Arthur asks if he can come to see the fossil, but Buster declines this, for he thinks someone would see it. Arthur attempts to reason with Buster that there's no point in having the fossil if they can't even see it themselves.

Mr. Ratburn enters the classroom, then talks to the class about their field trip and about how rare certain fossils are, especially footprints. In shock, Buster faints and falls backwards on his chair.

Later that night, Buster is at home writing at his desk, until there is a pound on the door. After he asks who it is, Ruth answers as the "fossil police". They then break down the door and the police bring in Arthur, who apologizes to Buster for telling; they had tickled him.

Ruth believes that Buster is keeping a dinosaur in his room. Buster protests, but a roar is suddenly heard in Buster's closet, and a T-Rex bursts in. Buster screams, only to wake up in his bed; it was all a dream. He goes to Arthur's house with the box and wakes up Arthur by throwing rocks at his bedroom window. When Buster tries to give the fossil to him, Arthur refuses.

Buster is desperate and says that it's causing him distress. He thought it would be great to have the fossil for himself, but the guilt of stealing is driving him crazy. Arthur says it doesn't belong to Buster nor himself. Arthur and Buster call Ranger Ruth and the next day, give the fossil to the museum.

The curator tells the boys that they aren't quite sure what made the footprint. Professors think it may be a baby Daspletosaurus or maybe an adult Coelosaur. Ruth shows the boys the nameplate for the fossil, which says: Dinosaur Footprint — discovered by Buster Baxter and Arthur Read. With that, Arthur and Buster exchange a high-five. 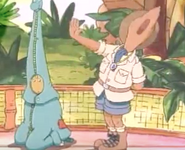