Buster's Growing Grudge is an educational online game based on the episode with the same name. It is part of the "Being a Friend" series, and the topic is "Forgiveness."

The game plays through a trimmed-down version of the story of the episode. Screenshots from the episode and speech bubbles are presented in a panel format. Occasionally, a splash screen will appear with a discussion question for the reader, such as if the reader thinks if Binky Barnes stole Buster's joke on purpose and why. The grudge is shown as a green blob sticking out of Buster's backpack, and it will grow and shrink depending on the events of the ending, where the reader can tell Buster what he should do about his grudge against Binky, such as confronting Binky or talking to Arthur.

Differences from the Episode

The story as a comic

Get back at Binky

Talk to a friend

There exists five unused sprites for the grudge. These are present in a sprite sheet called comic_sprites.png. 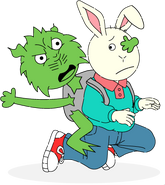 There exists an unused splash screen for the game, titled splash.png. The one used in-game is called splash.jpg. Both of these have versions that only display on mobile devices.

Graphics titled question1.jpg through question8.jpg feature the question slides shown in-game, but with the text pre-added. In-game, these all use the same base background, with the text drawn over it rather than already in the image data.