"Buster the Lounge Lizard" is the second half of the fourth episode in the fifteenth season of Arthur.

Buster's new toy accidentally ends up in the teacher's lounge.

Buster sees a TV commercial for a Dark Buggy model with lots of gadgets and wants to have it.

Buster shows Arthur the buggy at school and accidentally shoots the buggy's grappling hook at Binky. Binky warns him that Mr. Ratburn might confiscate the buggy, like he did with Binky's bouncy ball. Buster tells him to relax and that he's not gonna play with it, but put it in his desk.

Buster tries to smuggle the buggy into his desk drawer. He accidentally presses a button that makes the buggy jump up and float down on a parachute. Mr. Ratburn does not notice, but then the grappling hook pulls Mr. Ratburn's belt out of his pants. Mr. Ratburn wants to confiscate the buggy, but when it attaches itself to the ceiling and starts playing disco music, he tells Buster to just take it away. If Buster plays with it in class again, it will be confiscated for the whole school year.

Buster puts the buggy in his locker, but when he says “go”, it jumps out and drives into the teachers’ lounge.

When the others have gone, Binky offers to help Buster break into the teacher's lounge. After having a fantasy of Mr. Ratburn destroying his buggy, Buster meets Binky at the jungle gym. Binky wants to tunnel under the school, but Buster convinces him to go through the window instead.

The next morning before school, Binky gives Buster a leg-up to reach the teachers’ lounge window. He also, like an afterthought, asks Buster to retrieve his bouncy ball. Buster cannot go through with it, because the lounge is private. However, Mr. Ratburn sees the boys and gives Buster his “infernal contraption” back. Mr. Haney is disappointed because he did not get to play with it, but the teachers play with Binky's ball instead. 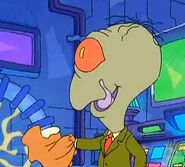