Care to Ware is a clothing exchange store in Elwood City. Before Muffy's re-decoration in "Spoiled Rotten!," this store was called Elwood City Clothing Exchange. It sells used clothing and accessories for bargain prices. The store owner is Buzz, who donates all of the proceeds to charity and the local soup kitchen.

Care to Ware's appearance when it was called, "Elwood City Clothing Exchange" 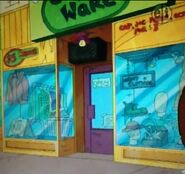 The store in "Based on a True Story"

Care to Ware in Season 16. (You can see Ladonna's hat in the window, thought she has already bought it from the store in Based on a True Story)

In "D.W. and the Beastly Birthday" the video arcade appears on the opposite side of Care to Ware
Add a photo to this gallery
Retrieved from "https://arthur.fandom.com/wiki/Care_to_Ware?oldid=395516"
Community content is available under CC-BY-SA unless otherwise noted.