Castles in the Sky

"Castles in the Sky" is the first half of the first episode in the ninth season of Arthur.

The gang's treehouse collapses, and architect Frank Gehry steps in to help them rebuild—if they can agree on a new design.

Arthur and Buster have a sled race and notice that the treehouse has collapsed under a load of snow.

Castles in the Sky

Arthur, Buster, Francine, Muffy and Binky sit in the Sugar Bowl and fondly remember how their parents built the treehouse three years earlier. A man at the next table introduces himself as Frank. He suggests they work on a new treehouse and give him a call when they have a design.

Arthur and Buster work together. Arthur suggests a castle design and a rocket design, but Buster remarks that both have been done. Buster suggests a treehouse made of a giant pizza. Arthur thinks the idea is ridiculous, so they decide to work alone.

When Arthur tells Francine about the pizza idea at school, she writes it down. Brain, meanwhile, claims to already have a design and asks Mrs. MacGrady for toothpicks.

Brain starts building a skyscraper out of toothpicks. He opens the window to make the glue dry faster and destroys his first model with a sneeze.

Francine sketches the tree and tries to design a treehouse that combines everyone's wishes. When she sees a squirrel jump from tree to tree, she gets an idea.

Buster sketches a pizza. When his mom takes a slice, he gets an inspiration.

Arthur, Buster and Francine show their designs to Frank. Arthur has combined a castle with rockets. He is disappointed when Frank points out that it looks like Sagrada Familia by Antoni Gaudi. Frank tells him to take it as a compliment, since Gaudi did amazing work. Buster presents a sketch of a treehouse made of pizza-slice-shaped platforms connected by ladders made of cheese. Frank remarks that a building can be inspired by anything and shows a photo of the Binoculars Building. However, he says that Buster's design is too much for one tree. Francine has solved that problem by using several trees, but that means there is no room for all kids to hang out together. Brain joins them with a skyscraper model made of toothpicks, but it would be too expensive to build in reality. Frank suggests that the kids work together.

The kids make a design together and start building. Eventually they have built a treehouse that looks like the old one, but they built it themselves and Frank says the design reflects their vision. He gives them a poster of the Guggenheim Museum as a parting gift, at which point Brain realizes that he is Frank Gehry the famous architect. 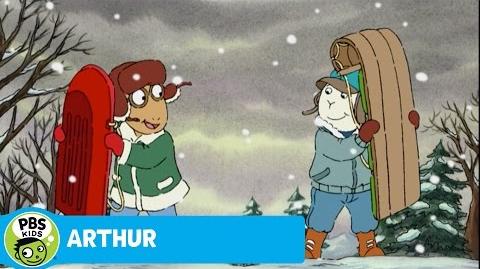 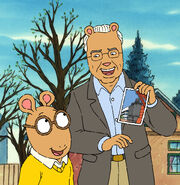