Caught in the Crosswires

"Caught in the Crosswires" is the first half of the ninth episode in the seventeenth season of Arthur.

Muffy is thrilled when mega producer J3 chooses her family for his latest reality TV project. After all, she was born to be star! But when Muffy's asked to amp up the drama between her and Bailey, she worries that she's being portrayed as a spoiled brat. Is it possible reality TV isn't as realistic as she thought?[4]

In the Crosswire House, Arthur explains to the viewers that sometimes, what is slated to be real isn't necessarily true. Case in point, the doorbell rings. Bailey answers it to be greeted with Jimmy Johnny Johnson, aka J-Cube, a famous reality TV producer, and his cameraman, Phil. The Crosswires arrive and Muffy excitedly reveals that she read J-Cube was looking for new reality TV stars, so she wrote to him about featuring her family. J-Cube asks Ed if he would like his family to be on TV (while getting his name wrong). After some thinking, he agrees with Muffy and Millicent's persuasion. Jimmy immediately begins filming, asking them to open the door again with more excitement and "keep it real". Arthur says, "See what I mean?" The doorbell rings again and he walks off.

Caught in the Crosswires

Muffy is in her closet narrating to the camera that it is her first day of filming and suggests they could make a second season featuring her brother, Chip, who's away at school. Francine then arrives and wonders who she's talking to. Muffy explains she and her family have to make three video diaries a day during "private moments" and briefly laments how being a star is hard work. Francine is unimpressed and invites Muffy to the movies to see Galaxy Kittens in 3D. Muffy wants to but declines as she has to go to dinner. When a confused Francine points out it's only 3:00, Jimmy and Phil pop up and explain they want to film dinner while it's still daylight. Jimmy compliments Francine for being the "snarky friend", leaving her taken aback.

At dinner, Ed and Millicent compliment Bailey's soup and take the opportunity to advertise a new luxury vehicle on sale at Crosswire Motors. Jimmy asks Phil to film Muffy, who thanks Bailey for the soup, though notes it's still a little hot. Jimmy asks accusingly why Bailey would serve her "scalding hot soup" in order to gauge her reaction. Muffy is confused until Bailey explains that Jimmy wants her to react more dramatically so the scene would be more interesting. Muffy is surprised, but agrees to his request. When the scene starts filming, she throws away her spoon and pushes her bowl away, yelling that the soup is too hot and demanding Bailey take it away. Impressed, Jimmy decides to make Muffy the star of the show.

Later, Muffy is getting ready for bed when she suddenly screams for Bailey. When he arrives, Muffy scolds him for not turning down her bedcovers and fluffing up one of her pillows. She then asks Jimmy and Phil for their verdict and they approve.

Over the next couple days, Muffy continually acts like a spoiled brat and has tantrums at any perceived slight from Bailey; she complains for him to pedal her bike faster, throws her omelette at her portrait for not being a frittata, and damages her coat hangers because they're made of wire. Bailey becomes progressively worn down by this, although he knows Muffy is only acting, while Jimmy and Phil are excited.

Later when Bailey drops her off at school, Muffy does her drama queen act, warning that he's going back to "Butler School" if he is late in picking her up. This shocks Buster and Francine, to which Muffy explains she was just acting because J-Cube thought the show would be good if she and Bailey fought a lot. However, Francine points out it seemed more like Muffy being mean, to which Buster says it's because she's the villain of the show. Muffy is shocked at this, to which Buster explains that every reality TV show has an antagonist, who's the most memorable character, such as Jeff in Top Supermarket Clerk. Muffy continues to deny this, insisting she'd also been nice to Bailey, but Francine retorts that it will take more to make up for her rudeness.

In Muffy's closet, Jimmy and Phil film Bailey, asking his point of view on being "abused" by Muffy. Bailey denies this, declaring he only works in kind, courteous households. Unsatisfied, Jimmy and Phil decide to stage the response they want; Jimmy has Bailey read out "I am so very, very miserable" from a notepad and hold a raw onion, causing his eyes to water.

That night, Millicent and Ed are walking down the corridor with Jimmy and Phil filming, talking about affordable luxury sedans at Crosswire Motors. Muffy sneaks out of bed and down the hall to Bailey's room, wanting to talk to him in private. She asks Bailey if she's really coming across as mean and spoiled in the show, which he confirms. Worried, Muffy asks if she's really like that but Bailey assures her she's not. When he asks if Muffy really believes he's a "spineless jellyfish", Muffy refutes this, citing Bailey to be one of the people she admires most, next to her father. As Muffy is upset, Bailey suggests they ignore Jimmy's suggestions and behave as themselves, which she happily agrees to.

The next day, Jimmy and Phil film the Crosswires at breakfast as they advertise Crosswire Motors. As Bailey enters with juice, Phil gets an idea and throws his banana on the ground, causing Bailey to slip on it and spill some juice on Muffy. He immediately apologizes, which Muffy accepts, saying she'll change after breakfast. Bewildered, Jimmy tries to provoke Muffy into getting angry with Bailey, but she simply states her dress isn't even new and it was just an accident. Jimmy then accuses Muffy of insulting Bailey despite him having been a butler for 50 years. Annoyed, Bailey corrects that he's 37 and Muffy didn't do so. Fed up, Jimmy declares he wants the scene to be more exciting and orders them to act that way.

However, Muffy refuses and wants to act as herself, telling Jimmy to film someone else if her family's not exciting enough. Jimmy scoffs that no one wants to see a show about the real Muffy as it would be boring. Ed is angered by Jimmy's attitude towards his daughter and demands they leave immediately. Bailey then pours juice all over Jimmy and smugly says it wasn't an accident, much to the Crosswires' amusement.

Later, Muffy, Buster, Arthur, and Francine watch a short for Caught in the Crosswires: A Family on the Brink. Muffy turns the TV off, explaining that J-cube only had enough footage for a half-hour segment that will air for three weeks. Francine and Arthur angrily refuse to watch the show and will tell everyone else not to either. Buster actually likes it, but promises not to watch for the sake of his friends. As they leave, Muffy suggests she use her experience to make a show called Bad Reality TV Producer, which Francine and Buster agree with. 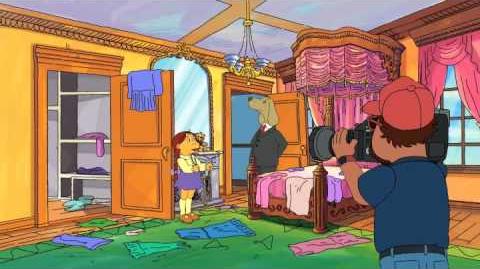 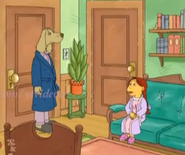 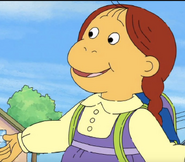