"Cents-less" is the first half of the fourth episode in the fifteenth season of Arthur.

Mr. Ratburn thinks it is time for his class to learn a little about money...or, rather, the lack of it. For the entire weekend, no one in the class can spend a cent.[1]

Mr. Ratburn talks about money and its importance to the class. He then states that it would be difficult to imagine life without money and tells the class that it is exactly what he wants the students to do. Buster then starts to daydream of him sitting on a stool at the Ice Cream Shop, while Brain gives him his order of a "frozen yogurt replica of the Montreal Stadium with extra snow". With food on his face, Buster asks if he can have the chair in the shop to which the Brain allows, stating that everything's free. Giving the chair to his butler outside, Buster flies off in a helicopter heading to Paris. His daydream is finished and the class scene returns where Mr. Ratburn then explains the process of bartering (trading). This time, Arthur daydreams of a scene inside a village where Brain is sculpting a goat out of rock that catches Arthur's eye. He offers to trade it for D.W.'s singing cow that Brain rejects, ending the daydream. Mr. Ratburn concludes by giving everyone, including himself, an experiment for the weekend which is to not spend any money. Muffy laughs, thinking that he is joking, only realizing that he isn't when everyone stares at her.

After school, as Muffy gets her backpack, Francine asks her how she is going to get through the weekend, pointing out that spending money for Muffy is like breathing. Muffy grabs out her credit card, convinced that using a credit card isn't the same as spending money in bills. But Francine informs her that it is still spending money, but you're just paying for it later. The next morning, Francine is convinced that Muffy won't last even a couple of days when suddenly she is given a letter to see its fifty dollars included! Her dad jokes, stating he would spend the money for her since she can't do it herself, but Francine is too smart.

Mr. Ratburn is having trouble finding a decent breakfast. He manages to find pistachio nuts, along with very old condensed milk... He tries it, but quickly decides it's not a...very healthy meal so he looks into a suitcase with his many puppets.

Later at the toy store, Muffy is hiding while she spies on Bailey purchasing the doll she wanted. Francine catches her and claims its still cheating when the cashier tells Muffy and Bailey someone else already ordered the "action figure". Muffy demands a barter and asks him what he wants for it. She tries to offer him scented skin lotion, but its no use. Muffy begs him and finally Binky tells her he wants a Buzz Mc Boom Boom trading Card and then he will give her the "action figure".

Francine tells Muffy it's very rare, but Brain may have an extra, as he collects many baseball cards. As the two girls leave, Francine suddenly sees some sports equipment she would love to buy and there is a sale this weekend only.

At Brain's house, he informs the girls that he has three of the cards Muffy is after, but he will only part with one of the cards for a particle accelerator. Muffy promises to bring it as Brain mentions not having enough room to put his cards on display and the two girls leave. Muffy is a bit concerned, knowing she can't provide the item that Brain wants and hopes he'd settle for her clothing instead when they suddenly see a puppet show going on in the park. After he finishes, he reveals himself to the many people and thanks them, then mentions he is only working for food, not money.

As he eats, Mr. Ratburn mentions that he forgot to go grocery shopping before the project so he had to bring out his old act. He then gives Muffy some advice when she mentions how badly she is doing so far and Muffy then tries to get him to give her the card through a trade. But it's no use, Brain has heard them all and does not find any of them funny. Muffy then tells him that she won't be able to get him what he wants until she is in college and then offers to help him with his display so that he doesn't have to keep switching things around.

In thanks of what she did for him, Brain barters the card Muffy needed and gives it to her. Muffy then goes to trade it so that she can get the doll she wanted.

In class, she is telling everybody her story and thanks Binky a final time for the "Action Figure" (even though it was a doll, and Binky said it wasn't) and then Francine mentions how Muffy managed to help her save her money and put it into the bank. The episode finishes as Mr. Ratburn confirms that this project was a "hit" by using his puppets, which makes Buster laugh. The episode then finishes. 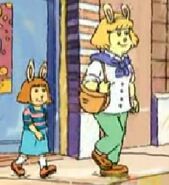 Buster being presented with a free ice cream in his daydream about a world without money.

Buster taking off in his private helicopter in his daydream about a world without money.

D.W.'s singing cow that Arthur offered to trade in his daydream about a world without money.

Muffy's reaction to Mr.Ratburn's assignment where she and the class are challenged to go the weekend without money.

Muffy's proposed solution on how to get around the restriction of not spending money.

Francine discussing her solution of using a credit card and informing her that it still counts as spending money.

Nigel Ratburn presenting different forms of money to the class.

Francine receiving $50 from a relative. She is disappointed she cannot spend it though.

Mr. Ratburn attempting to make Breakfast of the goods he has on hand as he forgot to go shopping

Mr.Ratburn frustrated at his failed attempt to make breakfast.

Muffy attempting to have Bailey buy a doll for her since she cannot buy it.

Francine informing Muffy that buying it through Bailey is still using money.

Binky has reserved the doll as it is of a wrestler.

Muffy offering to barter Lip Balm for the doll.

Muffy asks Binky if there is anything he would trade for it. He says he would for a Buzz McBoomBoom baseball card. 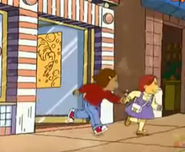 Francine and Muffy after Francine informs her that the Brain may have one.

Francine stopping to look at sporting equipment that she is tempted to buy.

The Brain showing his 3 Buzz McBoomBoom baseball cards, which he says he would be willing to trade one for a particle accelerator.

A picture of the Brain's unorganized baseball card collection, which he says he would like to be organized.

Mr. Ratburn brings out his puppets. He asks for food donations in exchange for putting on a show. This is his plan to eat without having to use money.

Muffy and Francine discussing their issues bartering with Mr.Ratburn

Buster telling Muffy that she could barter with jokes, like Buster did. Buster gives her a common joke to use in hopes of entertaining Brain.

Brain asks her when she will have the particle accelerator and she says that her dad said they couldn't break ground on it until she was in college.

The Brain begins to switch out his old displayed cards for new ones. Muffy offers to organize them so he can have all of them displayed.

A picture of the shelf organized by Muffy.

The Brain gives Muffy a Buzz McBoomBoom card in exchange for the service she gave to him, organizing his baseball card collection.

Muffy presenting to the class how she bartered for the doll.

Easter egg in the show. The cast are dressed up as animals in the picture above Muffy's head. 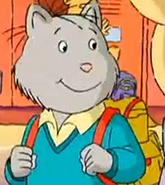