Cheikh Diouf[2] is Brain's cousin from Senegal, Africa. He is friends with D.W. He first appears in "In My Africa," when he moves from Senegal to Elwood City. He participates in activities with the other preschoolers, such as acting in the play "All About D.W.", and playing in the sandbox with his truck. Besides that, he is in the courtroom during the episode "Read and Flumberghast." Cheikh has other speaking roles since "In My Africa" in "The Pageant Pickle" and "Citizen Cheikh."

For some reasons, Cheikh is seen wearing a purple-and-red shirt with a yellow collar and violet pants that have green lines with purple designs on them. 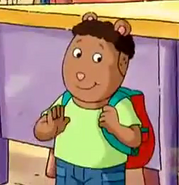 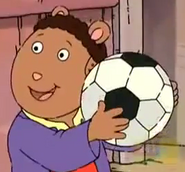 Cheikh's design as of Season 16

Standing directly next to Bud