Cheryl[1] Featherfoffer was Arthur Read's babysitter from when he was a little boy.

While carrying groceries, she once paid Buster when he helped her out.[2] She once worked at the Elwood City Times.[3]

According to her appearance on The Freddy Sprangler Show, Cheryl apparently has a very troubled relationship with her family, considering Ethel made off with her husband, stole all her money and burned her house down.[4]

She has a gray skin complexion has hair that is brown, but is almost red. She wears yellow glasses, yellow earrings, a light yellow turtleneck, purple pants with yellow flowers, and yellow shoes. In "Arthur's Lost Dog", she is seen with a tan skin complexion, blue glasses, pink sweater, and hair that is slightly browner. In the season 9 episode "It Came From Beyond", she is seen with an orange skin complexion, pink hair, a yellow sweater, a green skirt, red glasses, and green earrings. In D.W. Flips, Ms. Featherfoffer appears with beady eyes.

In an appearance in a picture in the Arthur's Guide to Children's Hospital Boston, she has blonde/yellow hair and a slightly orange skin complexion. She is wearing a green sweater and blue glasses. She is also seen working at the main lobby in this appearance. 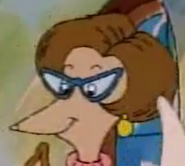 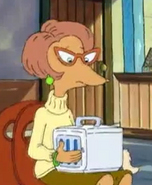 Another alternate appearance, in "It Came From Beyond"

Another alternate appearance, in Arthur's Guide to Children's Hospital Boston

Arthur disliked her the most out of his babysitters, because she was very strict and would force kids to go to bed for making noise, even when it was daytime and they weren't tired.