Start a Wiki
watch 01:48
The Loop (TV)
Do you like this video?
Coach Grimslid is the P.E. coach at Lakewood Elementary School. She first appeared in "Francine's Bad Hair Day" as a hairdresser who worked under Flossie at the Salon de Beauté, although later appearances such as "Arthur's Birthday" show her as P.E. coach at the school. She mostly appeared in early seasons, and has only rarely been seen in later seasons. In "The Last Day" she is revealed to be a fourth grade teacher during the upcoming school year.

Coach Grimslid has a brown skin complexion with curly brown hair. She wears a red jacket over a white shirt, with a pink tie. In her role as P.E. coach, she wears a skirt with a brown belt. In her most recent appearance on the show, her complexion is much lighter. She does, however, still wear a white shirt. 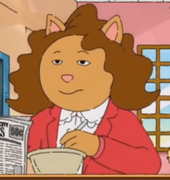 Flashback in the episode The Last Day
Add a photo to this gallery
Retrieved from "https://arthur.fandom.com/wiki/Coach_Grimslid?oldid=362738"
Community content is available under CC-BY-SA unless otherwise noted.